Pancreatic cancer is a particularly common malignancy with poor prognosis (1). Pancreaticoduodenectomy (PD) is still believed as the only possible curable treatment for proximal pancreatic carcinoma (2). With the swift development and abrupt evolution of minimally invasive surgery, laparoscopic pancreaticoduodenectomy (LPD) was successfully achieved since the first case was reported by Gagner and Pomp (3) in 1994, although PD has still been considered as one of the most complex procedures. LPD is no longer a rare but routine procedure (4,5) in some specialized centers because of its minimal invasion, rapid postoperative recovery, short hospital stay and comparable outcomes to open PD (OPD) (6-8).

At the beginning of LPD age, only the patients at early stage would be suggested to undergo LPD (9), for whom the traditional the portal vein (PV)—superior mesenteric vein (SMV) approach was still suitable. With the improved minimally invasive surgical techniques and accumulated experience in recent years, many studies confirmed LPD with comparable results to OPD even in the cases associated with vascular resection (10). For surgeons who highly experienced in LPD, indications are the same as for OPD (11,12). The major assessment of resectability is on the relationship of the tumor to the adjacent important vessels for borderline resectable cases. Along with the concept of “artery first approach” (13) proposed, the focus has shifted to the superior mesenteric artery (SMA) and SMA involvement has acquired a pivotal role in evaluating resectability of pancreatic head cancer (14).

SMA resection and construction increases surgical difficulty, and augments postoperative complications, but without infusive improvement in survival, and obviously it is hardly worth of an over-extensive operation (15,16). Thus, a precise preoperative staging is essential to perform an appropriate procedure and achieve a negative-margin resection. Preoperative imaging is always capable of providing an evaluation of resectability with a high accuracy for patients in early stage. Unfortunately, the more advanced stage the tumor is in, the poorer accuracy of assessment the imageology achieves (17), especially for those in the stage of “local advanced/borderline resectable” (16). As a result, it is definitely necessary that a trial dissection is performed for patients with uncertainty resectability. In classical PD, the procedure is performed conventionally from the right-anterior aspect of the pancreas to the left-posterior, and according to the traditional PV/SMV approach, SMA has to be dissected from the uncinated process and the head of pancreas before confirming if SMA is invaded already. Furthermore, the abutment of SMA should be determined as soon as possible intraoperatively to avoid unnecessary resection before irreversible steps are performed. The dissection of retroperitoneal margin hindered the spreading of LPD. Thus, “SMA-first” approach for LPD has emerged as the conditions require.

Various surgical techniques and approaches for LPD have been proposed titled “artery-first”. Although the indications, key points and potential benefits are different, all these techniques emphasize the importance of SMA exploration, integrality and en bloc resection (18-20). Management of the arteries of the head of pancreas and dissection of the uncinate process can be performed under the laparoscope easily following SMA exploration. Compared with standard PD, SMA-first approach leads to early evaluation of the circumferential involvement of SMA and provide evidence to terminate an unnecessary operation if tumor abutment of SMA exceeds over 180 degrees of the circumference of the vessel wall at an early step intraoperatively.

In standard PD, the bleeding rises mainly due to the congestion of afferent vessels (vein) after the pancreas head is removed. However, the ligation of efferent vessels (artery) prior to afferent vessels prevents the bleeding from the resected surface efficaciously and reduces blood loss during pancreatic transection significantly following the SMA-first approach (14,21-23). Due to the control of intraoperative bleeding, surgeons are able to accomplish total meso-pancreatoduodenum excision to ensure a negative margin (R0) resection at leisure, even an improved local recurrence (14). A negative SMA margin which is the posteromedial margin limited by the right aspect of SMA is proved as a positive predictor of survival (24,25). It is highly challenging to dissect SMA margin and the determination of this margin is confirmed after the accomplishment of resection in standard PD. Nevertheless, an early determination achieves in SMA-first procedures before transecting the pancreatic neck to avoid a resection with no contribution to survival.

After exposing SMA, the posterolateral invasion of SMV can be determined, which would affect the choice of the operative procedures in local advanced patients. At the meanwhile, the SMA-first techniques simplify and secure the venous dissection owing to that the venous drainage makes the veins clamped easily. SMA-first approach promotes en bloc resection, consistent with the principle of “no touching”.

The techniques of PD have developed rapidly in recent decades. In the efforts and innovation of generational surgeons, the concept of artery first has been established and accepted, taking the primary place of SMV/PV-first approach in traditional PD. Various artery-first approaches have been demonstrated in open PDs, such as right posterior approach, medial uncinate approach, inferior infracolic approach, left posterior approach, inferior supracolic approach and superior approach (Figure 1). The advantage and disadvantage vary from the approaches. All the six main approaches are not suitable for laparoscopic procedures, though LPD is derived from and based on open pancreaticoduodenectomy. In fact, a reasonable approach will benefit both the operation and outcome of patients undergoing LPD. In our experience, according to the anatomy characteristic of LPD, we preferred right posterior and inferior infracolic SMA approaches for LPD. 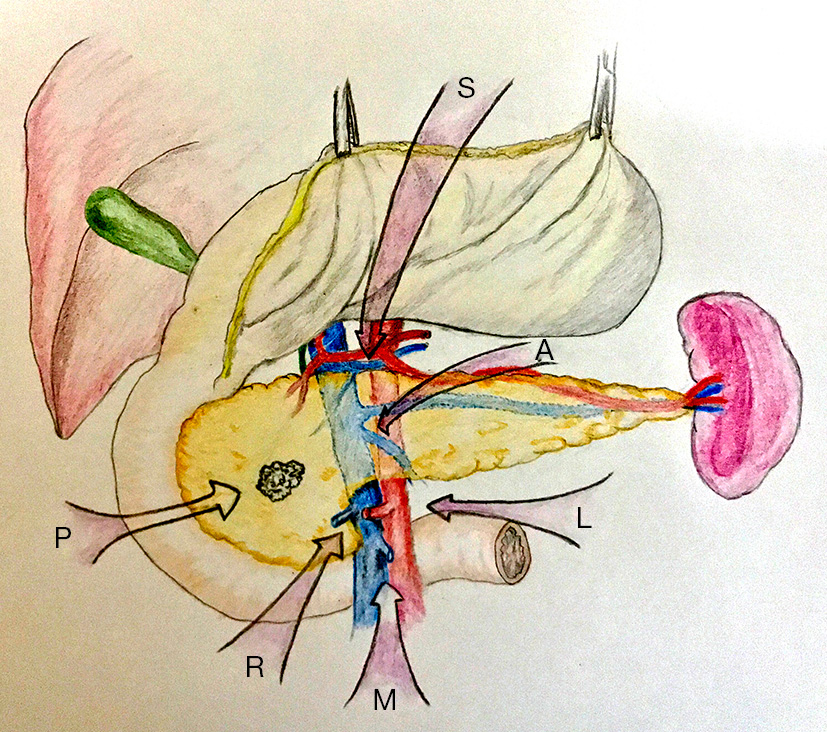 In our center, the patient is positioned supinely with splitting legs. Pneumoperitoneum is insufflated with Veress needle and followed by insertion a 12-mm port bellowing the umbilicus for the camera. Another two 12-mm ports are placed on the left and right midclavicular line respectively. One 5-mm port is placed in the left anterior axillary line and another 5-mm port in the right flank. Although other modifications of the port positions, they all follow the principle that all the ports surround the pancreatic cancer, lying in an arc. The physician stands on the right side of the patient and the assistant on the left. The assistant in charge of the laparoscope is between patient’s legs (Figure 2). 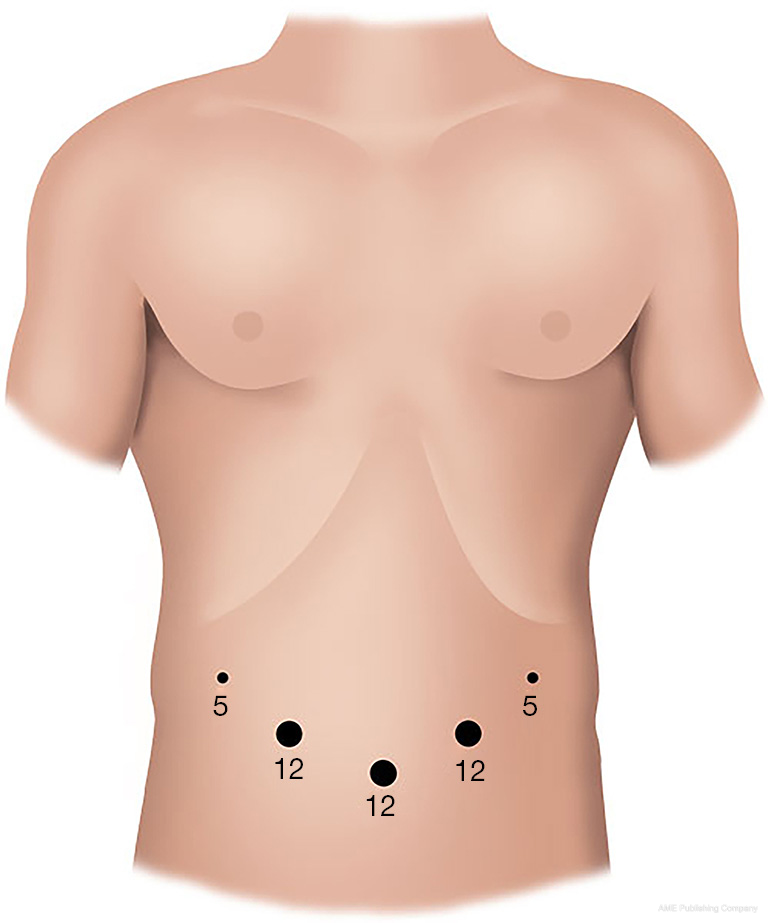 Figure 2 Trocars’ position. The numbers are the diameters of the trocars (mm).

Posterior approach to SMA was coined by Pessaux (13) and first descripted in 2006. Based on the open techniques, this approach was quickly accepted and applied to the laparoscope (26,27). The laparoscopic surgical dissection begins with lowing the right colic flexure by harmonic scalpel. Beginning with the Kocher maneuver, the duodenum is isolated from the foramen of Winslow to the Treitz ligament along the posterior plane, with the result of exposing the inferior vena cava (IVC), abdominal aorta (AA) and the left renal vein (LRV). Right now, para-aortic lymph nodes can be harvested and sampled for frozen pathology. The procedure will be terminated if the lymph node examination is positive for metastasis, which means the tumor is disseminate and unresectable.

After performing a modified Kocher maneuver by harmonic scalpel, the pancreatoduodenal block is mobilized adequately and can be lifted and retracted toward to the left side with laparoscopic atraumatic graspers. The origin of SMA is exposed where LRV crosses the aorta and taped (Figure 3). SMA is dissected along the posterior adventitia of the duodenum until the isolation of the junction of its third and fourth part is done. It is necessary to identify if an ectopic right hepatic artery arising from SMA exists and preserve it. It is of security to identify the distal of SMA after the proximal control of it. Identification, ligation with hemolock and dissected of the superior and inferior pancreatoduodenal artery (SPDA and IPDA) should be performed as they enter the pancreatic head and the uncinate process and the ligations can control the bleeding when dissecting efficiently. The exposure of SMV is presented following the excision of the Treitz fascia and the dissection of the anterior plane of the root of the mesentery. The frozen pathology of the SMA sheath should be examined and the procedure will be continued only if SMA margin is negative.

This approach was first descripted as “mesenteric approach” by Nakao in 1993. It is also called inferior infracolic approach since the concept of “artery-first approach” was established. The operation begins with opening mesocolon below the transverse colon, after the assistant lifts the transverse colon upward with two laparoscopic atraumatic graspers, and SMA and SMV are identified and exposed at the base of the transverse mesocolon, and retracted with color tapes separately (Figure 4). SMA is dissected right and down along with its own route in the posterior plane of transverse mesocolon to the lower margin of the pancreas. During the dissection, the ectopic right hepatic artery and the middle colic artery should be watched out. The anterior side of SMA and SMV is dissected following the dissection of the inferior plane of pancreas after the division of the gastrocolic ligament. At the moment, a frozen pathological examination of the lymphovascular tissue adjacent to SMA should be performed to determine the process of the procedure is necessary or not. After obtaining a permission of continuing resection, the IPDA and gastroduodenal artery (GDA) are identified and divided after clamped and ligated. 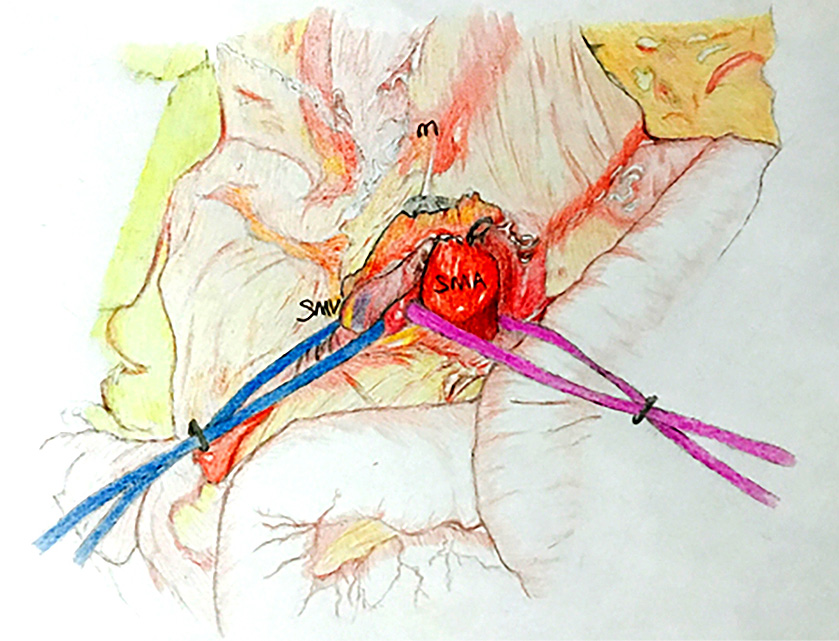 Recently, some groups have put uncinate approach (28,29) and left posterior approach (30) into trial in laparoscopic pancreatic cancer. They confirmed the safety and feasibility of the laparoscopic techniques, respectively. Actually, there no formulary is applicable for all conditions in practice. Certainly, more studies are required to provide adequate proof for each specific SMA-first approach.

In select patients, SMA-first approaches LPD is a safe and effective procedure when performed by experienced pancreatic surgeons, with advanced laparoscopic skills to achieve the similar oncological outcome comparable to those of OPD in high volume pancreatic center. It may become a promising and even favored approach for these patients with advanced pancreatic cancer given potential benefits of early laparoscopic evaluation of the resectability and less blood loss during pancreatic transection.

We would like to thank for the invitation from Guest Editor Dr. Barish Edil and Editor-in-Chief Dr. Lei Zheng. Also thanks to Dr. Lihui Tong for the kindly contribution to the article.

Ethical Statement: The authors are accountable for all aspects of the work in ensuring that questions related to the accuracy or integrity of any part of the work are appropriately investigated and resolved.