Endoscopic retrograde cholangiopancreatography (ERCP) is the most commonly used technique for the management of obstructive jaundice caused by malignant diseases, including cancers which located in the pancreatic head, the duodenal ampulla, or the distal common bile duct (1). Previous evidence has revealed that the overall failure rate of Endoscopic retrograde cholangiopancreatography-guided biliary drainage (ERCP-BD) was about 7% (2). However, in several clinical settings, such as the existence of anatomical variations, ampullary distortion, gastroduodenal obstruction, diverticulum in the duodenum, or preexisting duodenal stents, ERCP was associated with a high rate of failure (5–25%) (1,3). Percutaneous percutaneous transhepatic biliary drainage (PTBD) has been the alternative palliative treatment when ERCP fails. However, previous studies reported that PTBD was associated with high rate of complications, including bleeding, catheter dislocation, bile leakage, recurrent infection, and acute cholangitis (4).

Endoscopic ultrasound-guided biliary drainage (EUS-BD) was firstly introduced by Giovannini et al. in 2001 (5). Substantial evidence has suggested that EUS-BD was safe and feasible, and it can also be an alternative technique after unsuccessful ERCP-BD (6,7). Compared to PTBD, EUS-BD showed better clinical success rate (8), and EUS-BD was also associated with decreased incidence of bleeding and tube dislocation (9). In addition, EUS-BD seemed more cost-effective with fewer unscheduled reintervention than PTBD, and it provided less physical discomfort (8). An recent international multicenter survey also suggested that, when ERCP fails to achieve biliary drainage, most patients preferred EUS-BD over PTBD (10).

Given the safety and feasibility of EUS-BD (8), whether EUS-BD could be the first-line treatment for malignant obstructive jaundice as ERCP-BD remains to be elucidated. The primary aim of the current study is to compare the therapeutic efficacies and complications of EUS-BD and ERCP-BD through a systematic review and meta-analysis.

The current study was conducted according to the Preferred Reporting Items for Systematic Reviews and Meta-Analyses as previously described (11). Published studies were searched in the PubMed, Embase, and Cochrane databases before January 25, 2019. The search terms utilized for EUS- versus ERCP-guided biliary drainage included “endoscopic ultrasound”, “EUS”, “endoscopic retrograde cholangiopancreatography”, “ERCP”, and “biliary”. After removal of duplications, two authors independently screened the identified studies by the titles and abstracts. Then the remaining studies were further assessed for eligibility by reading the full-text. In addition, the references lists of included studies were also screened manually for other potential publications.

Included were studies comparing the therapeutic efficacy and complications of patients who underwent EUS-BD or ERCP-BD, and the studies should meet the following criteria: (I) randomized clinical trials (RCTs); (II) biliary obstruction caused by malignant disease; (III) comparable data of EUS-BD and ERCP-BD was available, and (IV) reported at least one outcome of interest as mentioned blow. Excluded were articles reporting the biliary obstruction caused by stones or other benign diseases, articles without records of the therapeutic efficacy or complications, meta-analysis or review articles, and articles in other languages other than English.

We performed the meta-analysis according to the Cochrane guidelines, and the data were reviewed and analyzed using Review Manager 5.3 software (The Cochrane Collaboration, Oxford, UK). In the current study, categorical variables were presented as percentages or frequencies, and continuous variables were presented as mean with standard deviations (SD). Those data which were presented as median with ranges were converted to the form of mean and SD according to the statistical algorithms described by Hozo et al. (14). For statistical analysis, we used the I2 to detect the heterogeneity among the included studies. Fixed-effects model (FEM) was used if there was no significant heterogeneity (I2<50% or I2=50%), and random-effects model (REM) was used in the setting of considerable heterogeneity (I2>50%). The Mantel-Haenszel method was used to compare the clinical data of EUS-BD and ERCP-BD. In the forest plot, we presented the results with odds ratio (OR) and 95% confidence intervals (CI). P<0.05 was considered as significant between EUS-BD and ERCP-BD.

The study selection flow diagram for the current study is summarized in Figure 1. A total of 821 studies were identified. After removal of duplications and screening of the titles and abstracts, we further screened the remaining 31 studies by reading the full text. Additionally, 28 studies were excluded for the reasons that there were no comparable data of EUS-BD and ERCP-BD, the pathological diagnosis were not malignant diseases, or studies without randomization. Finally, we identified three randomized clinical studies reporting the therapeutic efficacies and complications of patients who underwent EUS-BD or ERCP-BD because of malignancies, and a total of 220 patients (EUS-BD/ERCP-BD, 111/109) with malignant biliary obstruction were included. The basic characteristics of the included studies were summarized in Table 1. 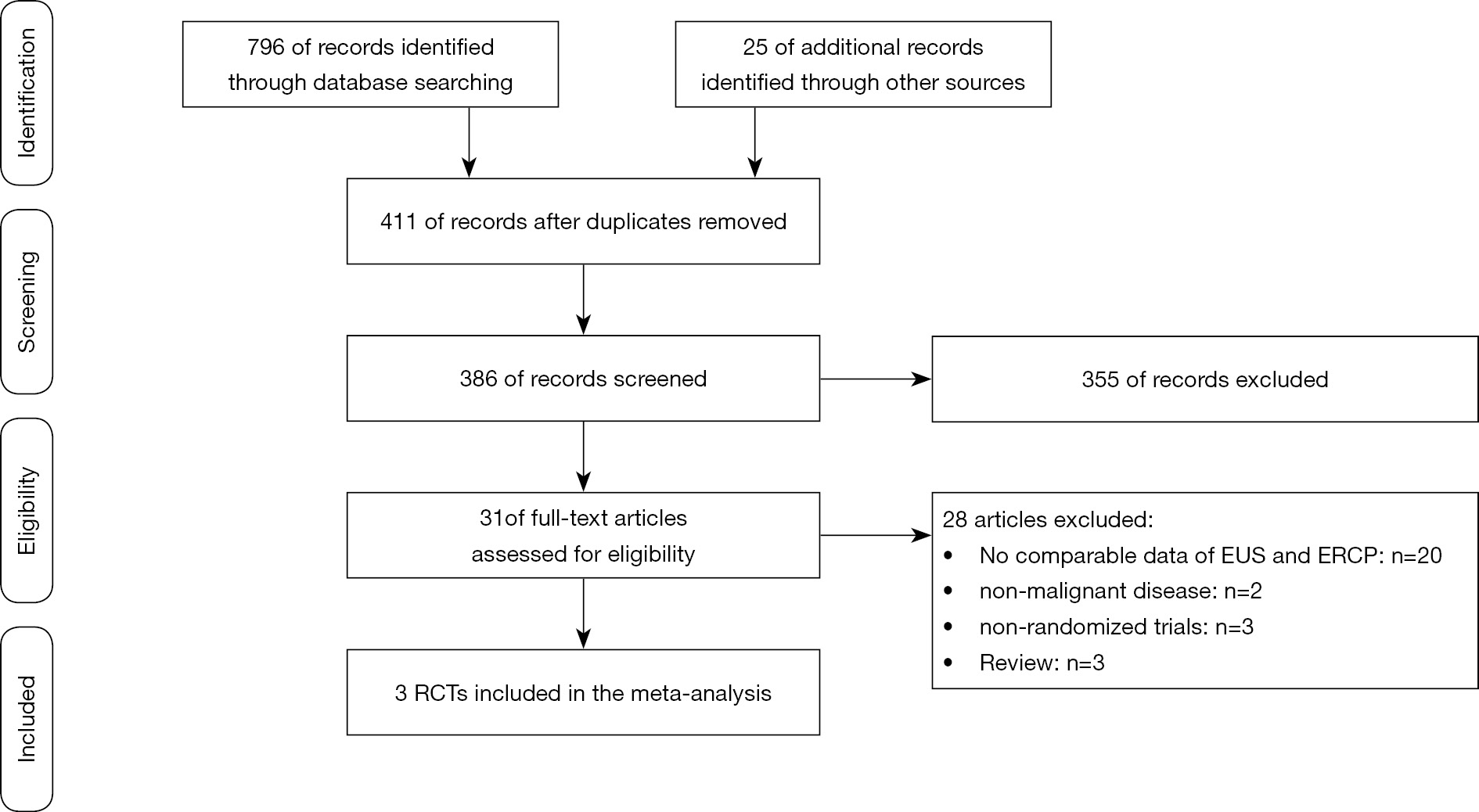 We used the modified Jadad score to assess the methodological quality according to the criteria as previously described (12,13). The two articles reported by Paik et al. and Bang et al. were of high quality (15,16), and both articles were scored 7. The article reported by Park et al. earned a score of 3, which was considered to be of low quality (17). Description of the methods of allocation concealment and blinding were lacking in the study reported by Park et al. The details of the assessment are shown in Table 2. 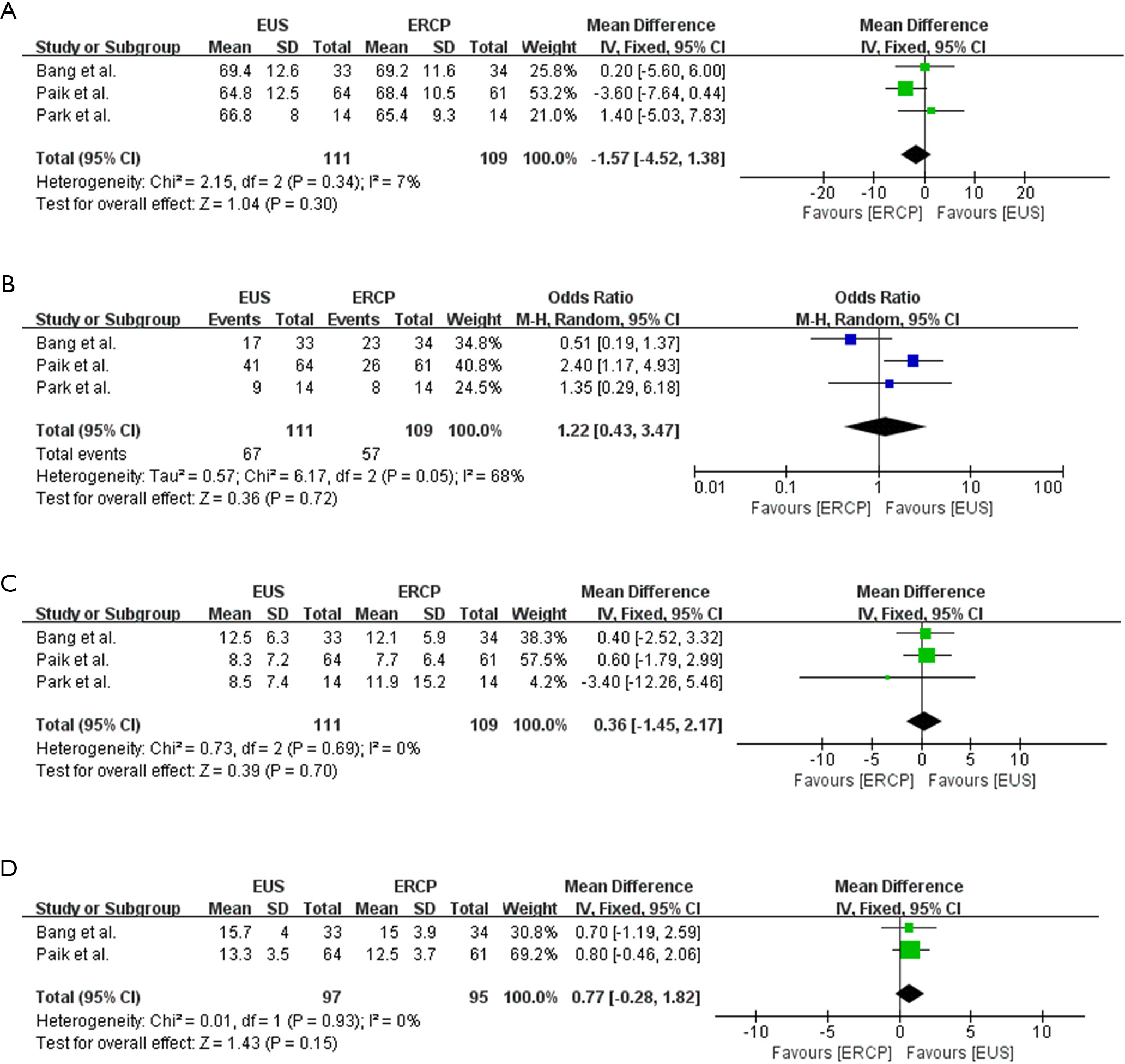 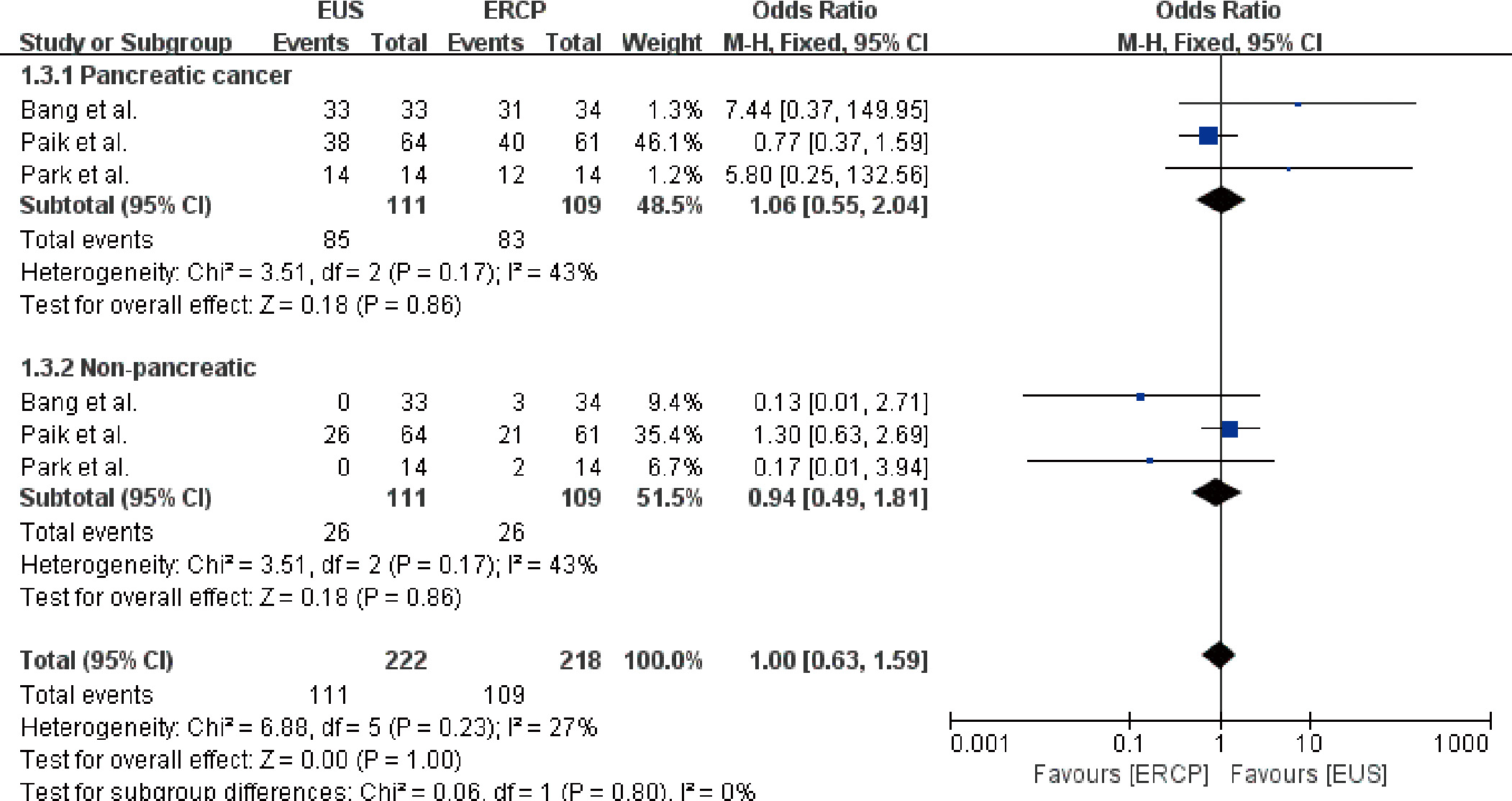 Figure 3 Forest plot of the pathological diagnosis of the included patients. 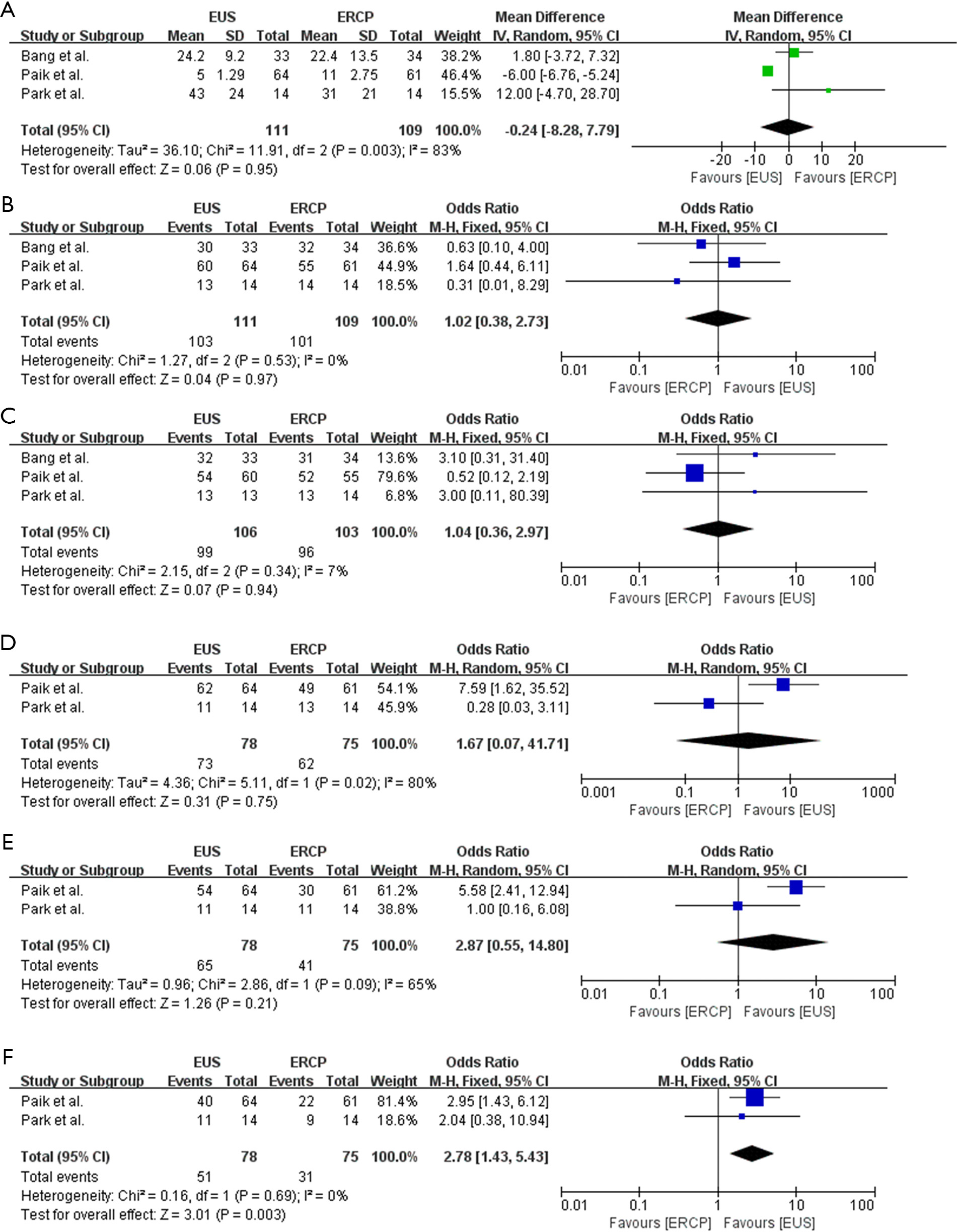 The procedure-associated complications reported by the included studies were summarized in Table 5. Severe adverse events did not occur in any of the three studies included, and all of the recorded adverse events were of mild and moderate (Table 5). The results showed that there was no significant difference between the EUS-BD and ERCP-BD groups regarding to the overall adverse events (OR =0.52, 95% CI: 0.07 to 4.11, P=0.54) (Figure 5A). The incidence of procedure-associated cholangitis was equivalent between EUS-BD and ERCP-BD (OR =0.56, 95% CI: 0.17 to 1.87, P=0.34) (Figure 5B). In the ERCP-BD group, 10 of the included patients occurred procedure-associated pancreatitis. No pancreatitis occurred in the EUS-BD group, and the results showed significant difference (OR =0.08, 95% CI: 0.01 to 0.62, P=0.02) (Figure 5C). In addition, we also revealed that the reintervention rate in the EUS-BD group was significantly lower than that in ERCP-BD group (OR =0.25, 95% CI: 0.12 to 0.54, P=0.0004) (Figure 5D). 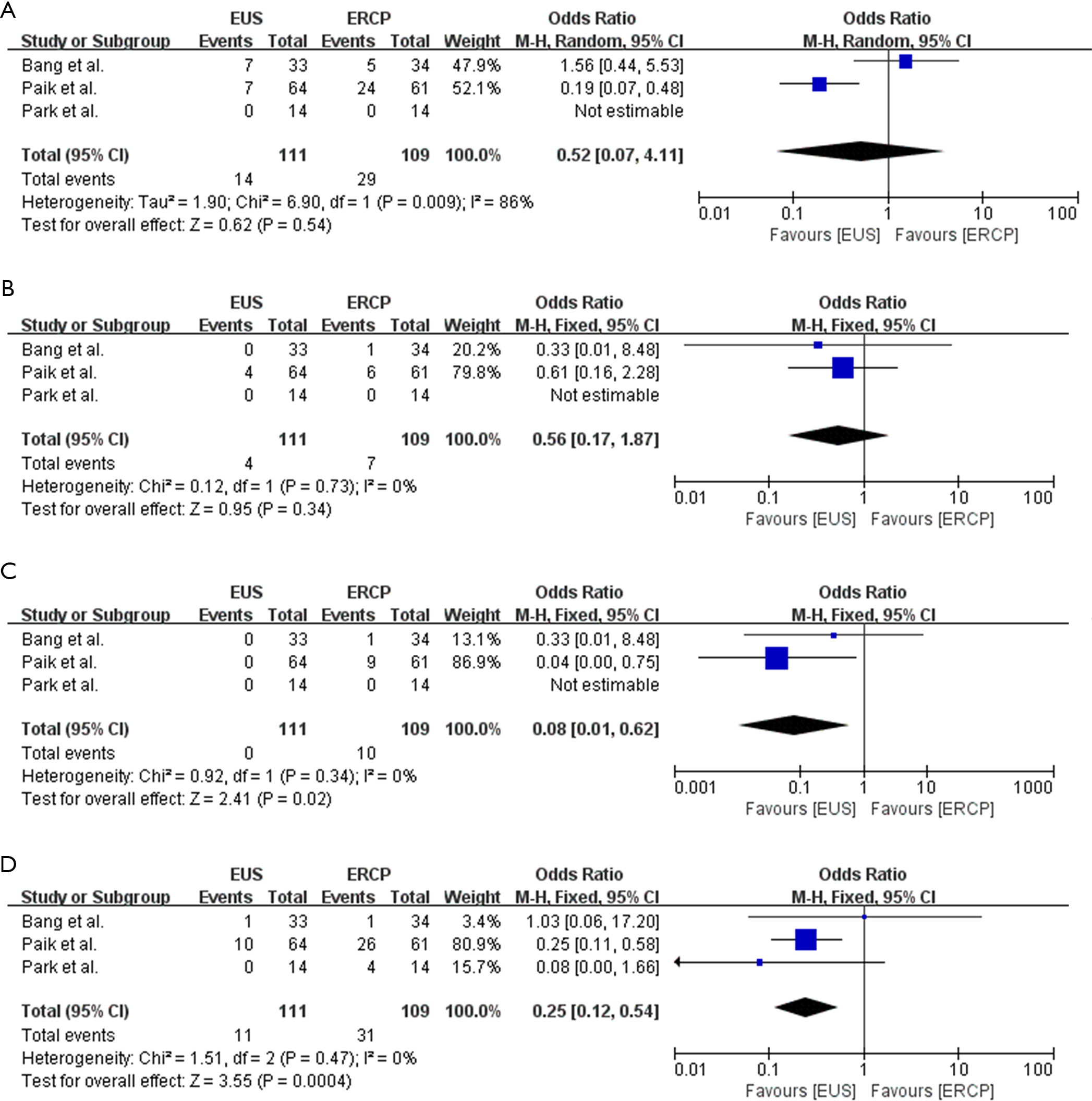 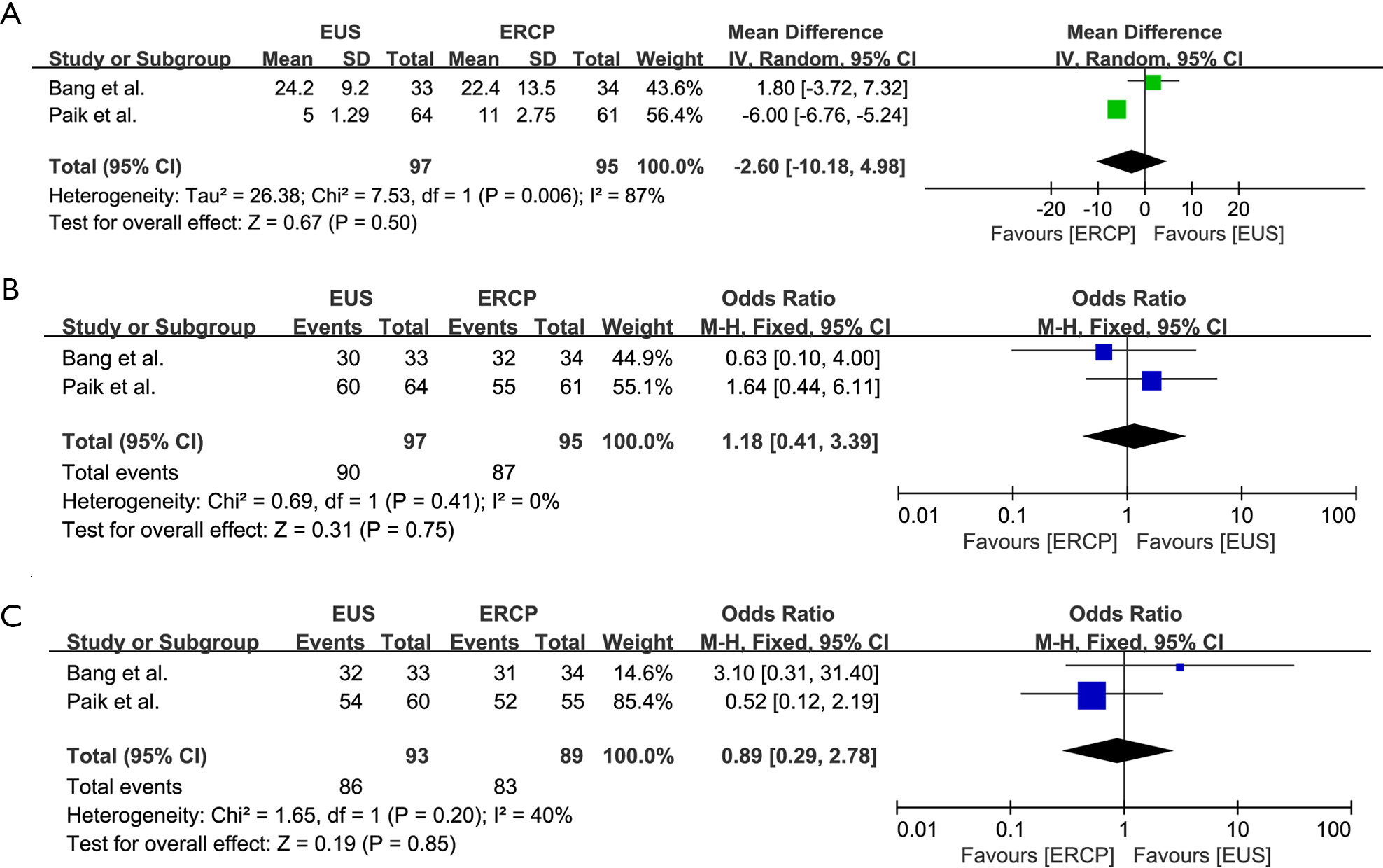 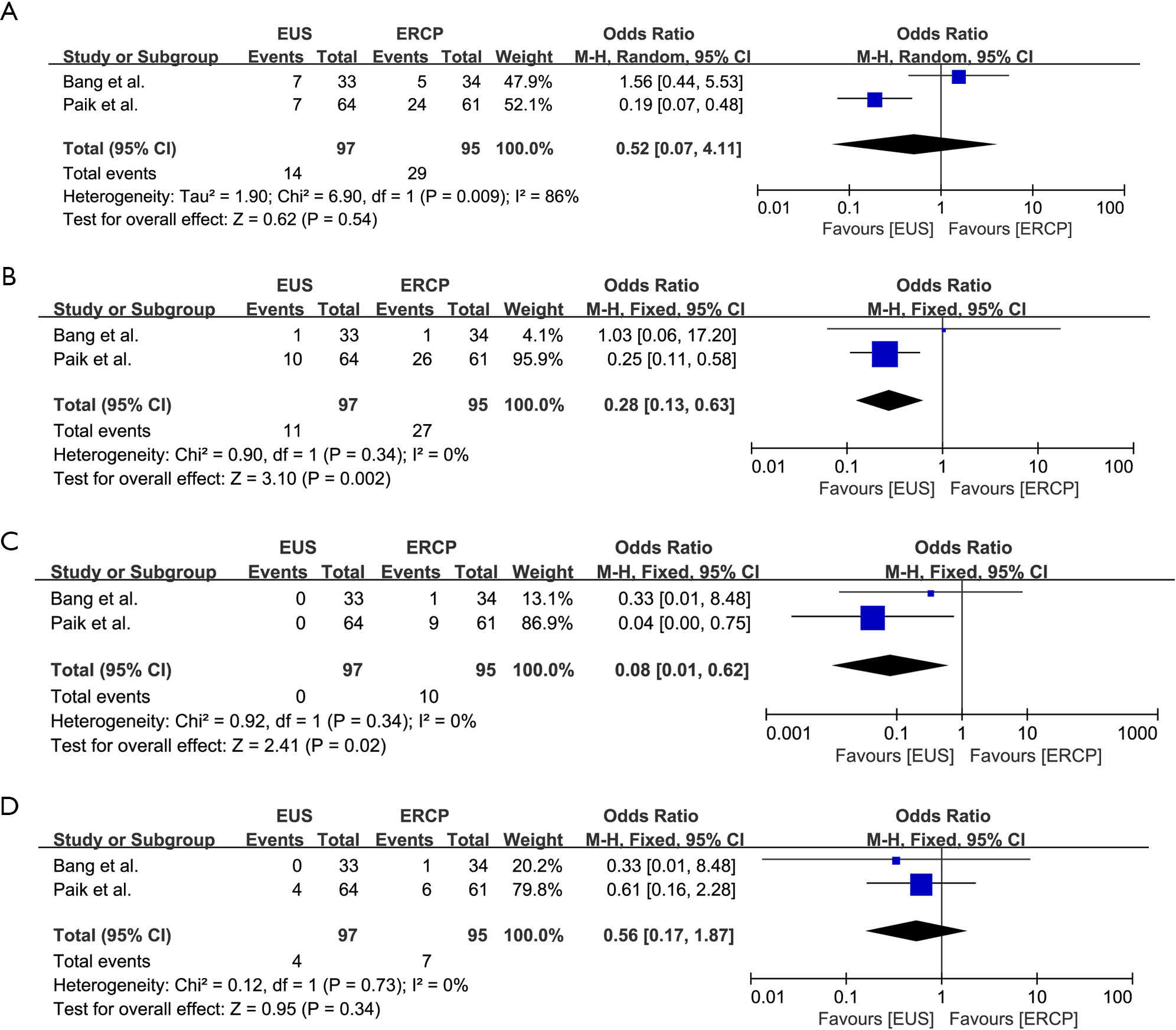 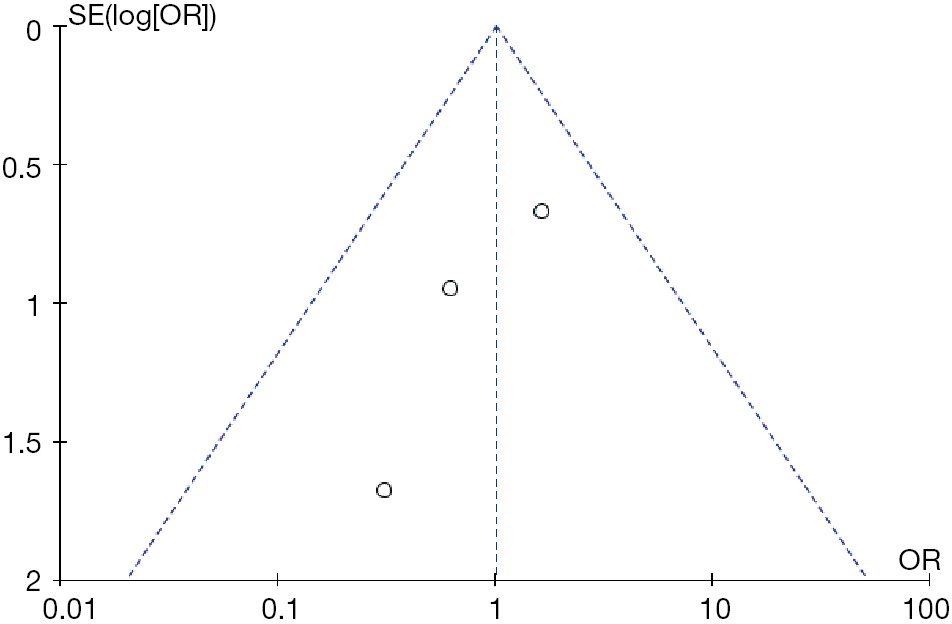 With a success rate more than 95% in experienced hands, ERCP-BD has been the standard treatment for biliary decompression in patients with malignant biliary obstruction when the patients were not suitable for curative surgery (18,19). ERCP also has some disadvantages, such as postinterventional pancreatitis, traumatic injury of the main pancreatic duct, and stent occlusion caused by ingrowth of the tumor (20,21). Paik et al. reported that ERCP-BD achieved an overall technical success rate of 90.2%. However, in the presence of duodenal invasion, the success rate of ERCP was reduced to 66.7% (16). A previous study reported only a 56% of technical success rate in patients with an indwelling gastroduodenal stent (22). EUS-BD has been used as an alternative treatment in the past when ERCP-BD fails. A wealth of evidence has also revealed the safety and feasibility of EUS-BD in the management of malignant biliary obstruction (23-25). The current study aimed to compare the therapeutic efficacies and procedure-associated complications of EUS-BD and ERCP as the first treatment option.

Previous retrospective study conducted by Kanno et al. showed that in cases wherein ERCP was impossible or ineffective, EUS-BD still achieved a technically success rate of 98% and a clinical success rate of 93% (6). Another study reported that in patients with malignant biliary obstruction and complicated with ascites, EUS-BD was also technically feasible (7). Several studies have compared the therapeutic efficacies of EUS-BD and ERCP-BD (22,26,27). Evidence from a retrospective case control study analyzed 208 patients who were diagnosed as malignant distal common bile duct obstruction and required for placement of self-expandable metal stent (SEMS), and the authors reported that the short-term outcome of EUS-BD is comparable to that of ERCP (26). However, one of the drawbacks of this retrospective study was that EUS-BD was performed after the failure of ERCP-BD, rather than as a first-line treatment. Another retrospective study conducted by Kawakubo et al. reported a promising efficacy of EUS-BD as a first-line treatment for patients with distal malignant biliary obstruction, and EUS-BD was associated with shorter procedure time and no risk of pancreatitis (27). The retrospective nature of these cohort studies was associated with inevitable selection bias, and several variables such as gender and stent diameter could impact the therapeutic effects (20). Therefore, only RCTs were included in the current meta-analysis to compare the therapeutic efficacies and complications of EUS-BD and ERCP-BD.

In the current study, we included the currently published three RCTs to compare the therapeutic effects of EUS-BD and ERCP-BD as the first choice of treatment. The results suggested that the therapeutic efficacy of EUS-BD was equivalent to that of ERCP-BD, and the technical and clinical success rates were similar between the two groups. Regarding to the incidence of procedure-related complications, EUS-BD was associated with decreased reintervention and procedure-associated pancreatitis. In addition, the frequency of stent patency at twelve months was also high in the EUS-BD group (Table 6). Our results were consistent with previous evidence that EUS-BD could be the first option of treatment for malignant biliary obstruction. In addition, the study by Paik and colleagues suggested that more preserved quality of life (QOL) were observed in the EUS-BD group. 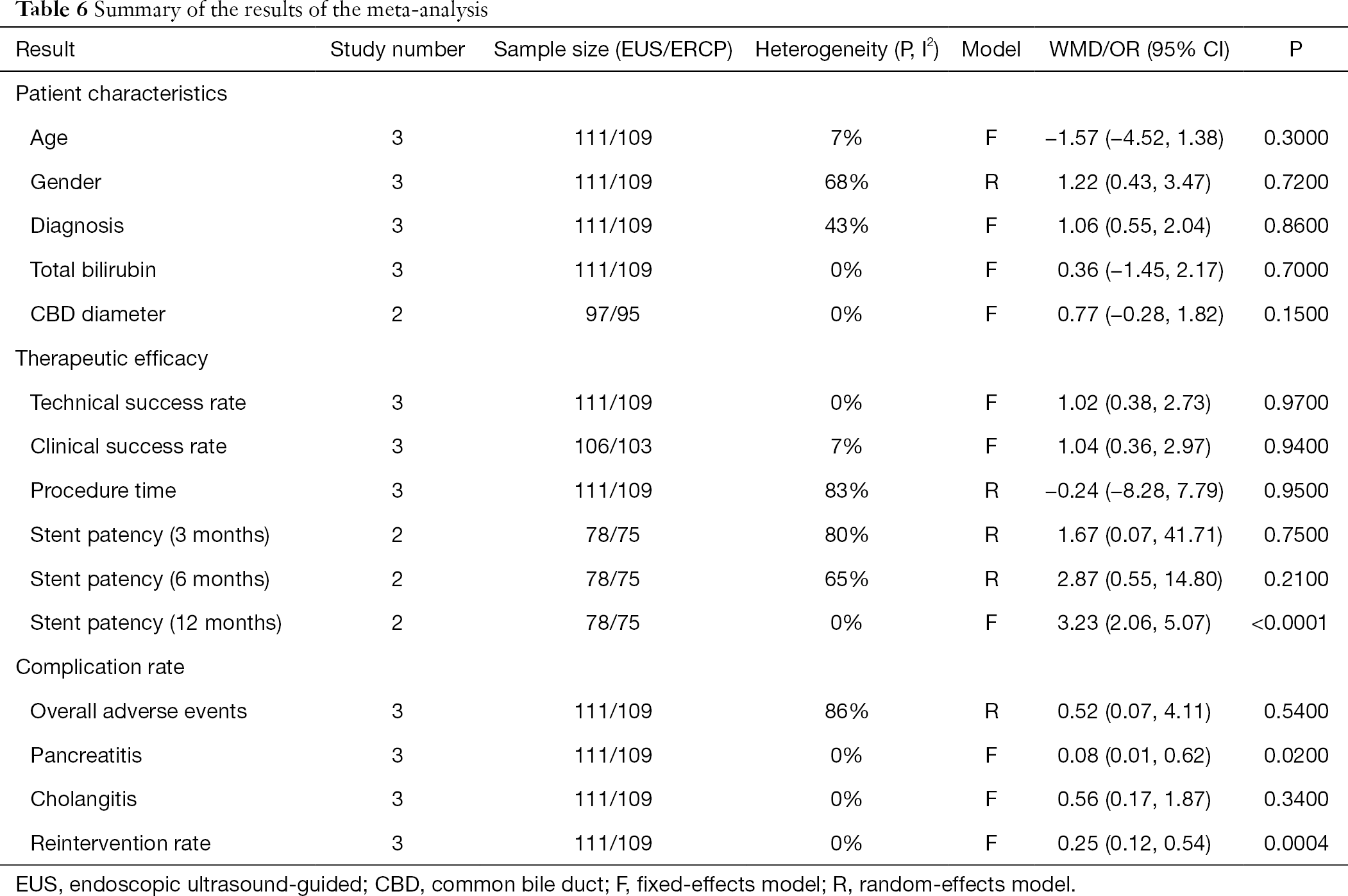 This study also has several limitations. One is that the number of patients included is relatively small. So far there are only three RCTs reported the comparison of EUS-BD and ERCP-BD for malignant disease. Another factor that could affect the outcomes of is the procedure learning curve, which was not described in detail in the included studies. The difference of the learning curves between the three included studies was reflected by the fact that the reintervention rate varied a lot between different studies. In addition, in the three RCTs, there was heterogeneity in the use of stents as the stents used in different studies come from different manufacturers.

In the current study, we revealed that, for the treatment of malignant obstructive jaundice, the therapeutic efficacies of EUS-BD were equivalent to that of ERCP-BD, given the result that the technical success rate, clinical success rate and procedure time were similar between the two groups. EUS seemed superior regarding to the 12-month stent patency, procedure-related pancreatitis and reintervention rate. Our results suggested that EUS-BD, like ERCP-BD, could be the first-line technique for the management of malignant bilairy obstruction. Due to the small number of cases included in this study, large sample RCT is still needed to validate the result.

Ethical Statement: The authors are accountable for all aspects of the work in ensuring that questions related to the accuracy or integrity of any part of the work are appropriately investigated and resolved.