Pancreatic cancer harbors high malignant potential with high frequency of local invasion and distant metastasis, with the 5-year overall survival of approximately 7% in Japan (1). Even after curative pancreatectomy, most of them would experience metastasis, commonly to the liver, peritoneum or the lungs (2). We experienced a case of metachronous renal metastasis of pancreatic cancer treated with nephrectomy and adjuvant chemotherapy, who remained recurrent free for 10 months after metastasectomy. Renal metastasis of pancreatic cancer is extremely rare with a single case report of a synchronous metastasis existing among the literatures (3). Although treatment centers on non-surgical strategies for advanced staged diseases, reports advocating benefits of resection of metastatic lesions are increasing (4-6). This is an initial report of a patient who underwent resection of a solitary renal metastasis from pancreatic cancer. In selected patients, surgical treatment for metastatic lesion may play a favorable role in prolonging survival.

A 58-year-old otherwise healthy man diagnosed with pancreatic head cancer underwent pancreaticoduodenectomy with portal vein resection. Preoperative contrast enhanced computed tomography (CT) showed a 25 mm hypovascular lesion at the pancreatic head with invasion to the superior mesenteric vein. Lymph nodes were not enlarged, and no distant metastases were detected. Carcinoembryonic antigen (CEA) and carbohydrate antigen 19-9 (CA19-9) were elevated at 12.3 µg/L (reference range: 0.8–4.8) and 129 U/mL, (reference range: <36) respectively. Splenic vein was preserved and complete microscopic resection (R0) was achieved. The pathological results were adenocarcinoma with squamous differentiation (Figure 1), pT3N1bM0 stage IIB according to the 7th edition of Japanese General Rules for the Study of Pancreatic Cancer (7) (T2N2M0 stage III in UICC classification). Adjuvant chemotherapy with S1 (tegafur, gimeracil, oteracil) was initiated according to the “Clinical practice guidelines for pancreatic cancer 2019 from the Japan Pancreas Society: a synopsis” (8). Follow up CT examined 9 months after surgery revealed a 10 mm hypovascular nodule in the left kidney (Figure 2A). As there were no elevation of the tumor markers, primary renal tumor or focal bacterial nephritis was suspected. Magnetic resonance imaging 2 months later revealed growth of the nodule to 15 mm (Figure 2B), and left nephrectomy was indicated for suspected primary renal tumor.

Immunohistochemistry results of the resected tumor were CAIX(–), AMACR(–), and PAX8(±), indicating that the tumor was not renal origin. Pathological results were compatible with adenocarcinoma of pancreatic origin (Figure 3), and we initiated adjuvant chemotherapy with gemcitabine. He is routinely followed up, and from the tumor markers and imaging studies, there is no definite evidence of recurrence for 10 months (Figure 4). 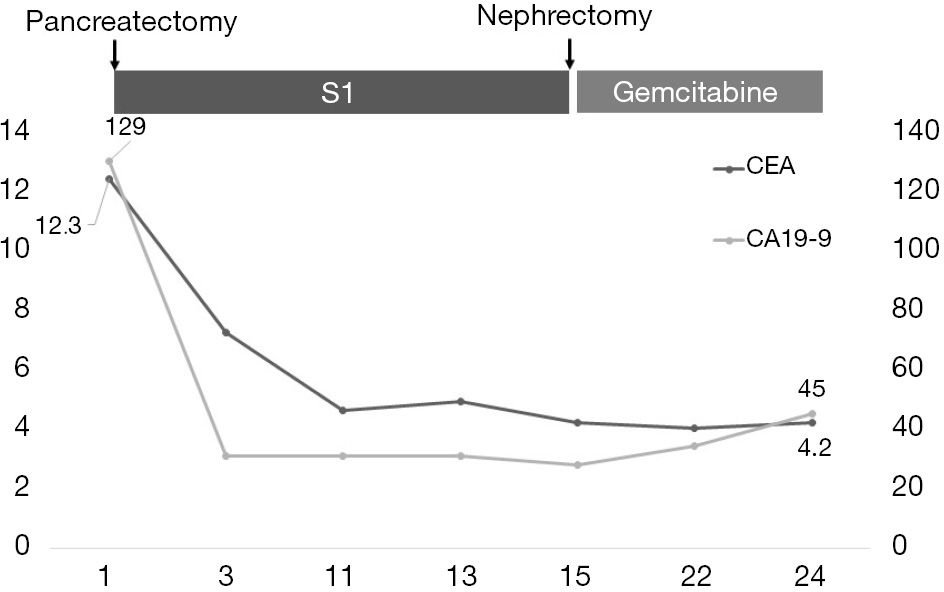 All procedures performed in studies involving human participants were in accordance with the ethical standards of the institutional and/or national research committee(s) and with the Helsinki Declaration (as revised in 2013). Written informed consent was obtained from the patient for publication of this case report and any accompanying images.

This case highlighted two important issues. First, this is the first report of a resected renal metastasis of pancreatic cancer. Second, metastasectomy for pancreatic cancer should be considered in selected cases of oligometastatic disease after stability on chemotherapy.

Renal metastases of pancreatic cancers were identified in the autopsy series (9), however, there was only one previous case report of a pathologically diagnosed pancreatic cancer metastasizing to the kidney, which was a synchronous metastasis (3). Pancreatic cancer aggressively invades the local structures and metastasize to the distant organs, such as lung and liver in a short period. For this patient, as the lymph node metastasis was positive at primary resection, microscopic hematogenous metastasis may have taken place. We hypothesize that adjuvant S1 therapy favorably treated the microscopic metastasis for about 9 months. Thereafter, uncontrollable cancer increased solitary at the kidney.

Conflicts of Interest: All authors have completed the ICMJE uniform disclosure form (available at http://dx.doi.org/10.21037/apc-20-1). The authors have no conflicts of interest to declare.

Ethical Statement: The authors are accountable for all aspects of the work in ensuring that questions related to the accuracy or integrity of any part of the work are appropriately investigated and resolved. All procedures performed in studies involving human participants were in accordance with the ethical standards of the institutional and/or national research committee(s) and with the Helsinki Declaration (as revised in 2013). Written informed consent was obtained from the patient for publication of this case report and any accompanying images.