Pancreatic ductal adenocarcinoma (PDAC) is projected to be the 3rd leading cause of cancer-related deaths in the United States with an estimated 5-year overall survival (OS) of approximately 8% (1). Surgery is the only curative approach, but the majority of patients tend to present with advanced stage of disease. In a patient with unresectable or locally advanced pancreatic cancer (LAPC), radiotherapy with or without chemotherapy remains an important modality in achieving local control. Recent results of the LAP07 study that compared chemotherapy alone vs. chemoradiation for LAPC demonstrated no difference in OS, but a significantly better local control for the chemoradiation arm (2). This study has brought the role of radiation in pancreatic cancer into question, and a selective approach to its use is favored. Furthermore, conventional fractionation delivered over 6 weeks was utilized in the majority of studies for LAPC. This approach with a long course of chemoradiation has a long track record, but conventional doses are still sub-therapeutic, achieving local control rates of 70–80% at 2 years. Therefore, there is increasing interest to explore other radiotherapy techniques or regimens to improve patients’ outcomes with LAPC. Here we review the literature and summarize the strategies for utilizing modern and emerging radiation treatment techniques for patients with LAPC.

Partly due to the convenience of finishing radiation within 1 week and the increasing utilization of technology in radiation practice, the interest in SBRT for PDAC has increased. The goal is to deliver a high dose to the tumor that is safe, respecting the dose tolerance of surrounding normal structures such as the small bowel and stomach.

One of the initial approaches to SBRT involved a single dose of radiation to the tumor. Investigators at Stanford reported the feasibility and safety of single dose SBRT in 6 patients with LAPC (5). However, a subsequent larger SBRT study showed that although single dose SBRT was efficacious, the rate of late toxicity was high with up to 20% of Grade 2+ toxicity (6). Multiple other publications, mostly retrospective studies, have reported the efficacy and toxicity of SBRT in patients with LAPC (Table 1). Overall, fractionated SBRT regimens of 3 to 5 fractions are as efficacious as single fraction treatment achieving a 1-year local control of approximately 80% but fractionated treatments are better tolerated than single fraction SBRT. 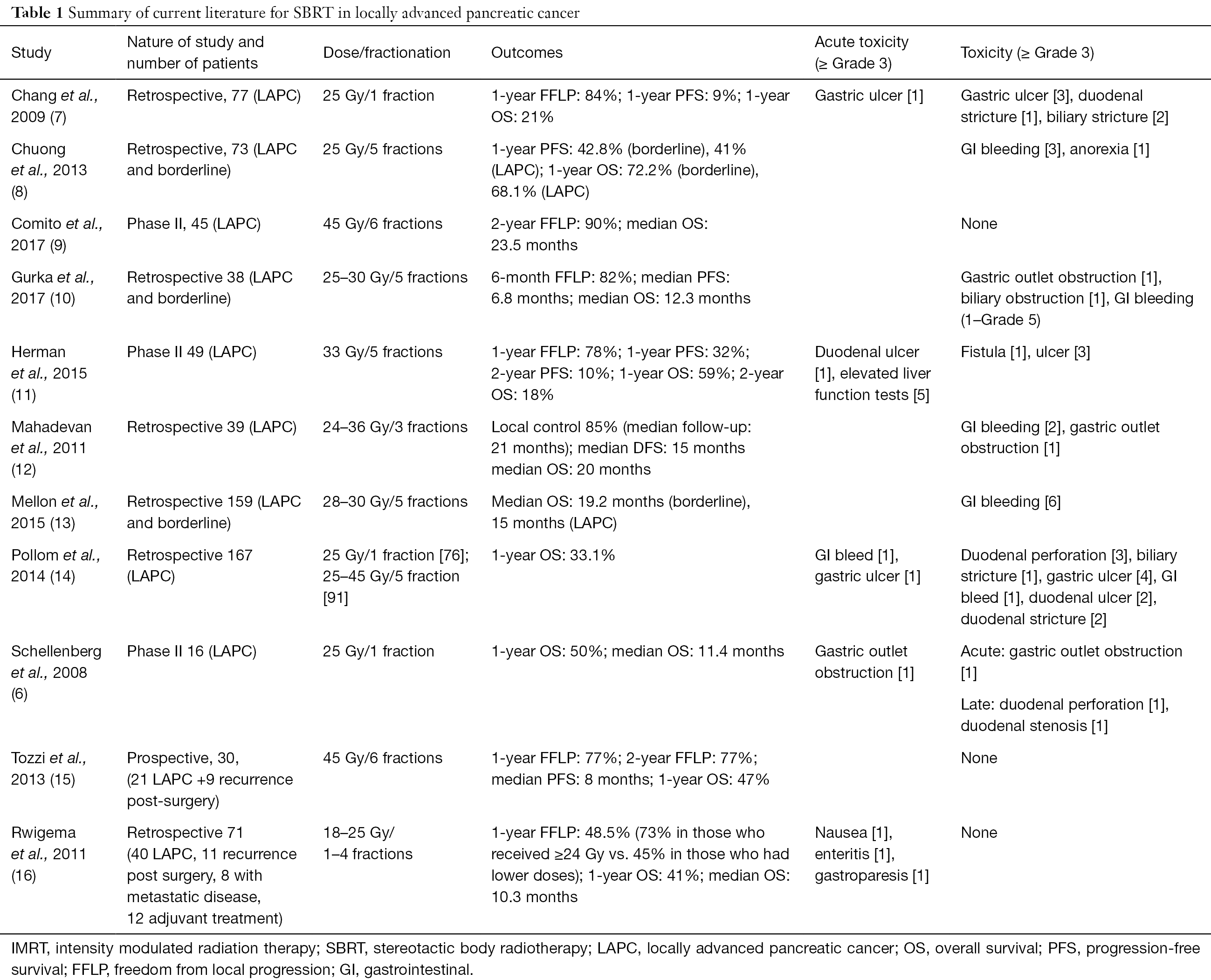 Achieving these results with SBRT requires error margins less than 2 mm, in general. This degree of accuracy can be attained with on-board imaging such as cone-beam CT or CT-on-rails (5,17,18), in combination with respiratory motion management with breath hold or abdominal compression (17,19). Finally, to achieve sharp dose gradients, intensity modulated radiation therapy is used. With these technologies, SBRT demonstrates low rates of Grade 3 or higher radiation-related late toxicities (Tables 1,2); however, some toxicities such as gastrointestinal bleeding and perforation can be fatal. Therefore, proper quality assurance of treatment planning and delivery is essential to minimize the risk of such complications. 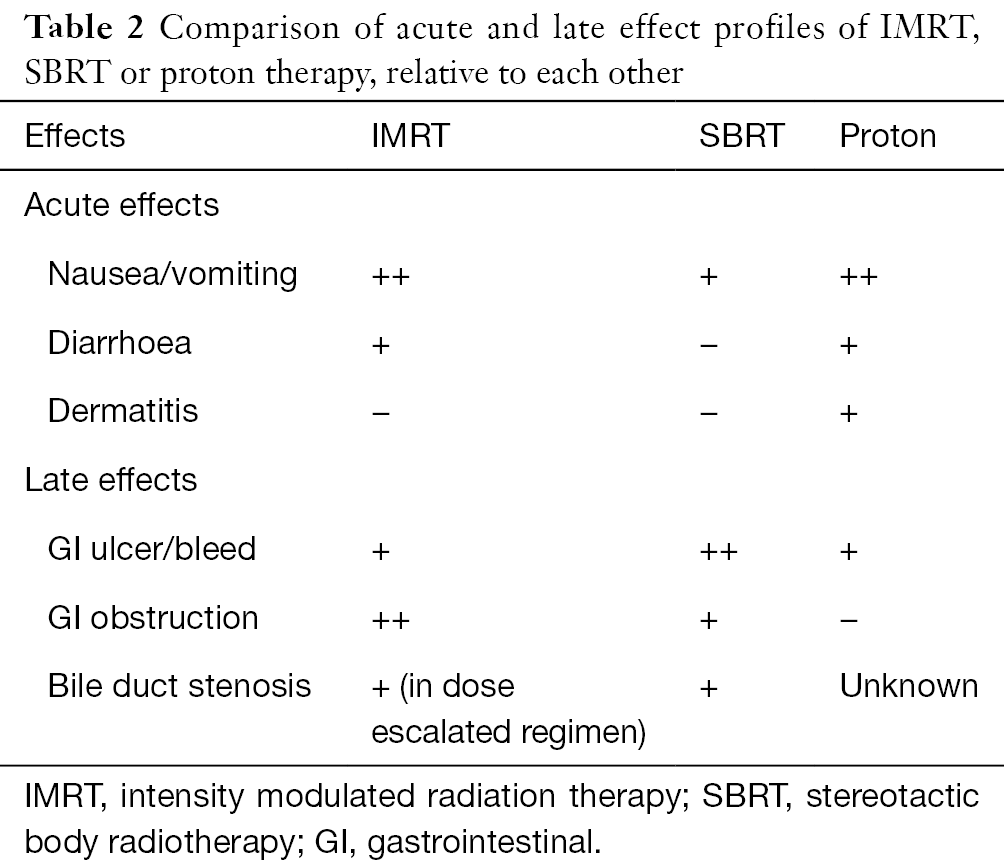 Table 2 Comparison of acute and late effect profiles of IMRT, SBRT or proton therapy, relative to each other
Full table 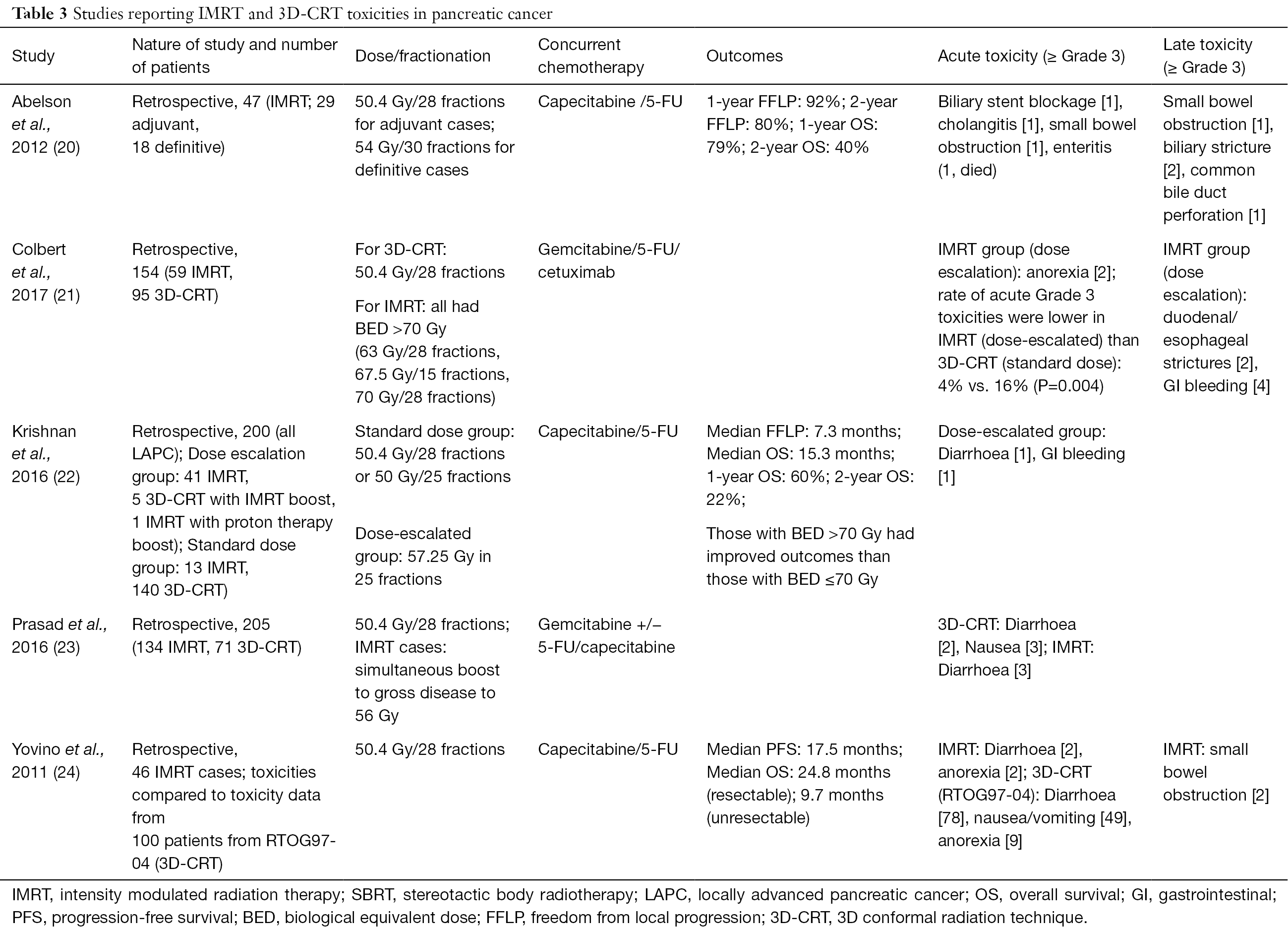 IMRT is a well-established contemporary radiation planning and delivery technique which utilizes multiple radiation beams to delivery conformal dose to the target allowing sparing of adjacent normal organs. Prior to the implementation or advancement of IMRT technique, 3D conformal radiation technique (3D-CRT) was used. In 3D-CRT, typically 3 to 4 beams were used to deliver dose to the target (the intersection of all beams). In IMRT, typically 7 to 9 beams are used to allow a more conformal dose delivery to the target while spreading the low dose scatter across the beams. While this IMRT approach generally achieves lower maximal doses to the surrounding normal organs than 3D-CRT, it results in a larger volume of the body receiving a low dose bath (i.e., higher integral dose).

There has been no prospective comparative study to show that IMRT is better tolerated than 3D-CRT. In a systematic review by Bittner et al. (25), the authors collated treatment-related toxicities from 13 IMRT studies and seven 3D-CRT studies. Although no substantial difference in survival was observed between the two treatment techniques, the authors reported Grade 3 or higher acute gastrointestinal toxicities were significantly lower in those who had IMRT (7.8% vs. 13.4%, P<0.001 for nausea and vomiting, and 2% vs. 11.6%, P<0.001 for diarrhea). In addition, and more importantly, there was significantly less Grade 3 or higher late toxicity in those who had IMRT compared to 3D-CRT (5% vs. 10.6%, P=0.017). A retrospective study by Colbert et al. (21) showed that patients who had IMRT to a higher dose (escalated dose fractionation) had lower rates of Grade 3+ acute toxicities during radiotherapy, compared to those who had 3D-CRT with conventional dose fractionation of 50.4 Gy in 28 fractions.

The ability to “dose paint” is one main advantage of IMRT over 3D-CRT. IMRT may be used in the context of SBRT (delivery within 3–6 fractions) or longer courses of radiation (15–28 fractions). The use of IMRT over longer courses of radiation has been studied for conventional doses of radiation treatment (50 Gy in 1.8 to 2 Gy per fraction) (Figure 2) and escalated doses (Figure 3). The conventional radiation dose provided relatively good local control (~70–80% at 2 years) but randomized studies have not been shown to improve OS in patients with LAPC. Historically, the standard dose was set at 50.4 Gy due to the dose tolerance of adjacent normal structures such as small bowel and the stomach. However, with IMRT, the total dose to the tumor can be increased while ensuring the dose constraints of normal tissues are respected. The MD Anderson Cancer Center group had showed improved outcomes in terms of OS and locoregional relapse free survival in patients who received escalated dose (biological equivalent dose >70 Gy) compared to those who had standard radiation dose or biological equivalent does of <70 Gy (22). Only 1 out of 200 patients in the cohort developed Grade 3 acute toxicity. In a follow-up comparative study of treatment-related toxicities in patients who had a dose escalated regimen (biological equivalent dose >70 Gy) using IMRT and those who had standard radiation dose of 50.4 Gy in 28 fractions delivered using 3D-CRT, the group observed an overall lower rates of Grade 3 acute in those who received dose-escalated regimen delivered using IMRT compared those who received standard radiation dose delivered using 3D-CRT technique (4% vs. 16%, P=0.004) (21). Six of 59 patients who received the dose-escalated regimen developed Grade 3+ late toxicity in form of either gastrointestinal stricture or bleeding. Therefore, with current advancements in imaging during radiotherapy, dose-escalated radiation therapy either using IMRT or SBRT is an area of interest for further investigation. 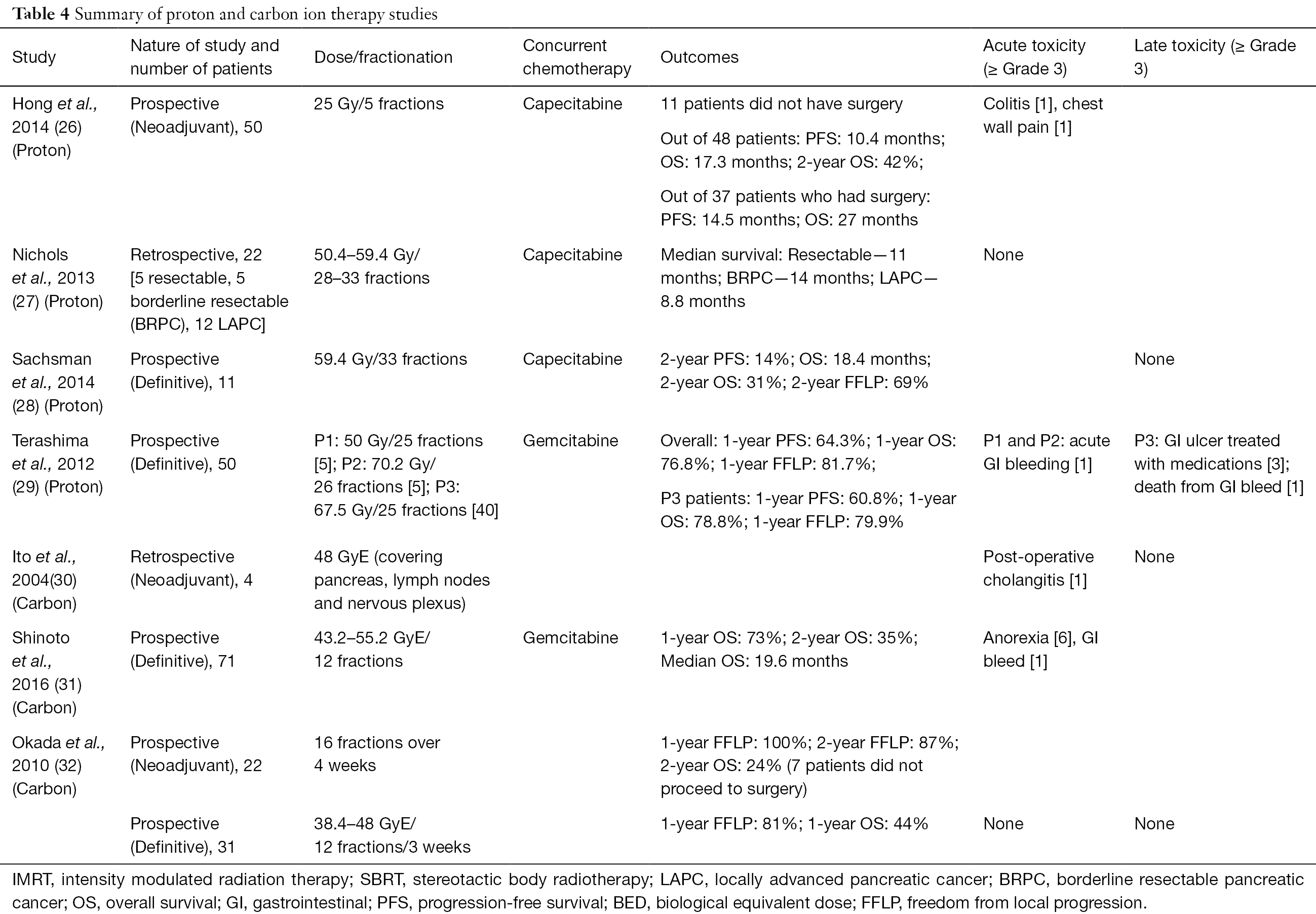 Proton therapy (Figure 4) is an emerging radiation modality that is of increasing interest due to its unique properties of having no exit dose in beam path beyond the target (33). Radiobiologically, protons, as positively charged particles, have higher linear energy transfer (LET) compared to photons (currently utilized in SBRT and IMRT), thus translating to potentially greater double-stranded DNA damage in targeted region and higher cell kill than photon. Although the idea of using proton therapy in patients with LAPC is attractive due to the potential benefits of greater cell kill and possibly minimal acute and late toxicity due to less low dose scatter, the use of proton therapy in treating patients with pancreatic cancer is currently investigational and the clinical evidence is limited (Table 4).

The dosimetric benefit of proton therapy compared to IMRT was demonstrated in a study by Thompson et al. (34). Using planning images from 13 patients with unresectable pancreatic cancer, they showed that proton plans had significantly lower stomach and small bowel doses than IMRT plans in the 20–45 Gy regions. Furthermore, there was 50% less mean liver dose and 18% less mean kidney dose in the generated proton plans compared to IMRT plans. Within the intermediate to high dose regions of at least 45 Gy, the proton plans had higher dose than IMRT plans. Therefore, this study suggests that the treating physician should be mindful of the radiation ‘hot spots’ within the intermediate to high dose regions when reviewing a proton plan. However, the ‘hot spot’ generated by protons may be exploited if it is deposited within the tumor, thereby delivering an escalated dose to the tumor and generating greater cell kill.

Hong and colleagues (26), in a prospective phase I/II trial, demonstrated the feasibility and safety of short course (25 Gy in 5 fractions) proton therapy in 50 patients with borderline resectable pancreatic cancer. Forty-eight patients were evaluable. Only two patients developed Grade 3+ acute toxicity—one with colitis, and another with chest wall pain. Eleven patients did not have subsequent surgical resection. The cohort, as a whole, achieved a median progression-free and OS of 10 and 17 months, and a 2-year OS of 42%. In those who had surgery, they achieved a median progression-free and OS of 15 and 27 months. In another prospective study of 11 patients by Sachsman et al. (28) using a conventional fractionated regimen (59.4 Gy in 33 fractions) demonstrated a 2-year freedom from local progression rate of 69% and 2-year OS rate of 31%. No significant late effects were reported.

Although the evidence for proton therapy is limited, the above 2 studies have established that proton therapy is feasible, and can be further explored as a modality of treatment for patients with pancreatic cancer. The biological effects of protons to normal tissues as compared to photons remain to be accurately determined, and on-board imaging of proton therapy for pancreatic cancer treatments is yet to be optimized. Therefore, this modality should be used with caution and further guidelines with regards to patient selection, dose/fractionation, on-board imaging, and internal organ motion management during proton therapy are required.

Another form of particle-based therapy is carbon ions. This therapy is currently being explored in pancreatic cancer treatment. There is no carbon ion facility in North America currently. In Japan, investigators have reported their experience in treating patients with pancreatic cancer with carbon ions, showing promising outcomes with minimal acute toxicities (30,32,35) (Table 4). There has been no data on the potential late toxicities of carbon ion therapy as yet.

The current data for PDAC suggest that a selective approach should be used when conventional radiation therapy is delivered (50 Gy in 25–28 fractions). In the era of personalized therapy, there are emerging and continuing efforts to improve radiation treatment and outcomes for patients with PDAC. As the tumor is frequently located in close proximity to radiosensitive gastrointestinal structures, advancements in treatment techniques and imaging modalities have enabled the effective and safe delivery of higher doses of radiation, and there is evidence that these higher doses may translate to better outcomes. Further study is warranted with these emerging techniques of SBRT, escalated dose radiation with IMRT, and charged particle radiation.