In his 1994 manuscript reporting the first laparoscopic pancreatoduodenectomy (LPD), Gagner stated “the benefit of a laparoscopic approach to surgery of this magnitude may not be as apparent as that of a less-complex laparoscopic procedure” (1). Over 20 years later, his statement remains remarkably accurate. Minimally invasive approaches to surgery have become the standard of care for most surgical procedures in the abdomen, but minimally invasive pancreatoduodenectomy (MIPD) has largely remained confined to select centers.

Nationwide databases imply that MIPD is being explored by an increasing number of centers (2). The associated outcomes during this “exploratory phase” appear unacceptable as compared to those of the well-established, open surgical approach (3,4). This raises the questions: is MIPD feasible, does it provide benefit, what are the selection criteria, where does one train to perform these procedures, and what credentials should the surgeon and hospital require? The present literature provides single surgeon or institution outcomes, but high-level data to help answer these questions remains scarce (5-12). Here, we present the challenges/pitfalls of MIPD in the context of the present data addressing the notion that MIPD confers benefit to the patient.

The majority of the available comparative data regarding the potential benefit of MIPD is of poor quality, arising from single surgeon or single center experiences. Typically, these comparative studies have evaluated outcomes between surgeons performing MIPD with surgeons who do not. Large-scale analysis of national databases also has inherent flaws. The surgical volume of centers performing pancreatoduodenectomy, whether open or minimally invasive, varies greatly. The comparison of high volume surgeons or centers doing open pancreatoduodenectomy (OPD) compared to low volume MIPD, and vice versa, is not a fair comparison. A multi-center, randomized control trial comparing MIPD to OPD with high volume surgeons would be necessary but logistically difficult. Only two, single center, randomized control trials have been published (10,13). Thus, high-level data supporting the benefit MIPD is lacking. Table 1 catalogs clinical outcomes from multiple studies comparing MIPD with OPD. 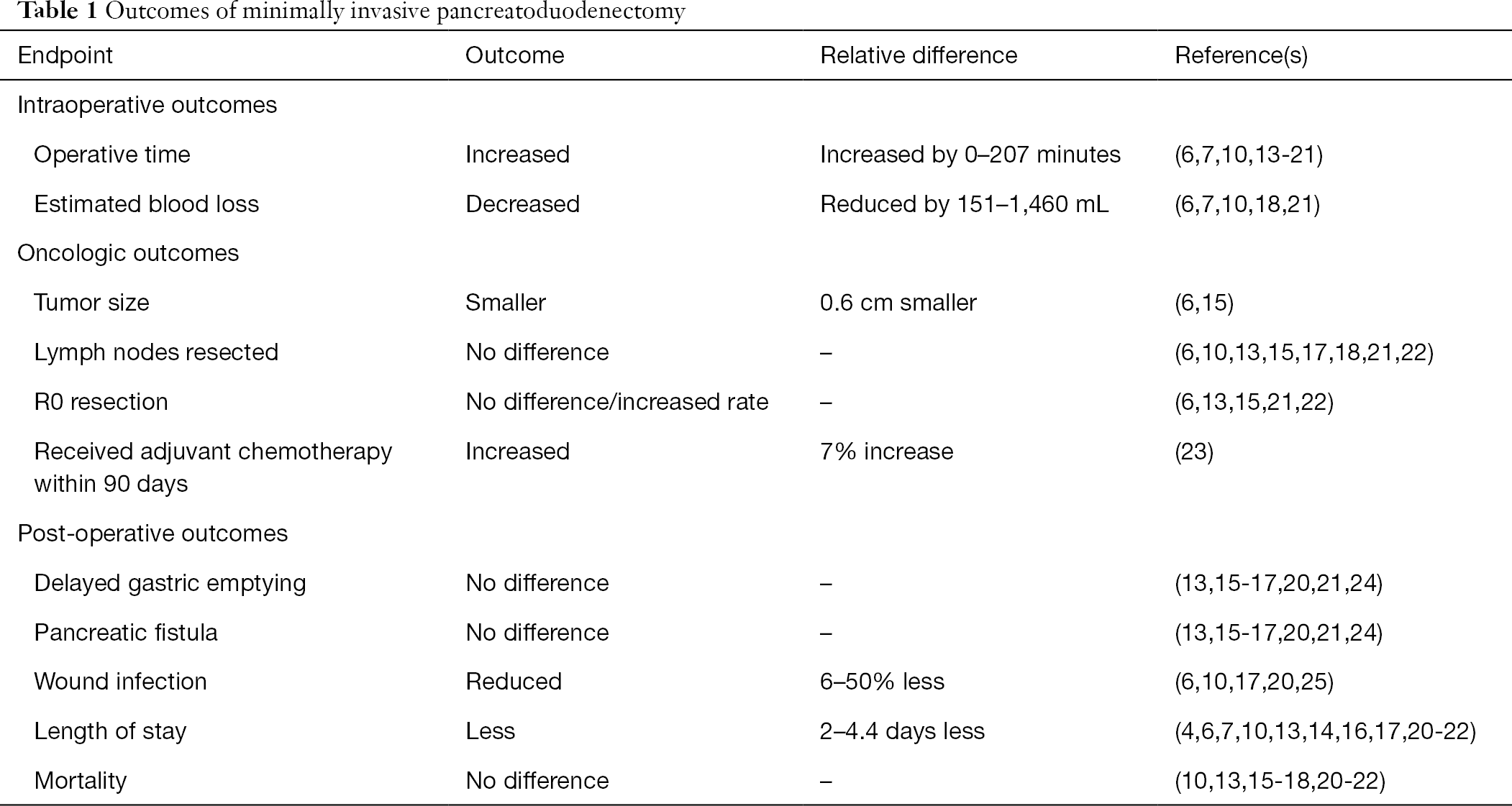 As expected, multiple studies have shown that MIPD is associated with longer operative times. The difference in mean operative times varies from 0–207 minutes between studies (6,7,10,14-19). The primary intraoperative benefit is decreased estimated blood loss (EBL). Decrease in EBL ranges from 151 to 1,460 mL, but is consistently lower across studies (6,7,10,13-19). However, the evidence that this has could lead to a consistent reduction in rates of transfusion of packed red blood cells is inconsistent. In a recent evaluation of NSQIP data comparing MIPD to OPD, blood loss requiring transfusion within 72 hours after operation was reduced from 14.4% to 7.9% (20). On the other hand, Poves et al. did not demonstrate significant differences in transfusion requirement in a recent single center randomized trial.

Analysis of post-operative outcomes identifies some benefits of MIPD. Patients appear to benefit from shorter ICU and total length of stay (4,6,7,10,13,14,16,17). Total length of stay in MIPD has been shown to be decreased between 2–4 days compared to OPD. The rate of surgical site infection (SSI) appears to be decreased in MIPD. Multiple studies have demonstrated a decrease in SSI ranging from 6% to 50% (6,10,17,25). Unfortunately, none of these studies have quantified the clinical impact of these SSIs.

Two, single institution studies have demonstrated that long-term oncologic outcomes between MIPD and OPD are similar (6,15). These studies noted smaller tumor size in MIPD specimens and an associated superior R0 resection rate. Analysis of patients in the National Cancer Database, demonstrated no difference in overall survival in patients undergoing LPD vs. OPD (22). A meta-analysis further confirmed this finding (21). Amongst five studies that evaluated surrogates of oncologic outcome, two studies found an increase in total number of lymph nodes harvested in the MIPD arm (6,10,15,17,18). Adjuvant chemotherapy has been shown to improve survival in patients with pancreatic cancer (26). Croome et al. were able to show a significant decrease in patients receiving delayed adjuvant chemotherapy or no chemotherapy at all after LPD (23), but this is conflicted by an analysis of the national cancer database (22). Overall, there is no strong evidence that MIPD provides superior oncologic outcomes.

Centers performing MIPD tend to do LPD or RPD, but not both, so comparison is challenging. A recent analysis of NSQIP data by Nassour et al. compared 235 LPD to 192 RPD (27). Patient selection appears different with RPD patients less likely to have undergone neoadjuvant chemotherapy or need vascular or multi-visceral resection. RPD were less like to be converted to open (11.4% vs. 26.0%), but other outcomes such as operative time, reoperation rate, length of stay, 30-day mortality, and major complication rates were similar. RPD were more likely to have superficial SSI (9.3% vs. 3.8%). Analysis of oncologic outcomes provided by the National Cancer Database, including overall survival, was also similar (28). Overall, major outcomes are likely similar between the two groups but further studies are warranted.

The often mentioned difference between RPD and LPD include availability, articulation, haptic feedback, 3-dimensional imaging, image stabilization, and cost. These differences drive surgeon preference for one platform over the other, but the general consensus at this time is that the robotic platform is less demanding on surgeon skill but does come at the expense of requiring additional training.

Intraoperative exposure, such as the Kocher maneuver, and reconstruction including the pancreatojejunostomy vary significantly between open and minimally invasive approaches. Figure 1 depicts a few of the many technical challenges associated with MIPD. There is a small volume of literature that addresses early experience in MIPD, and it suggests that at a high-volume pancreatic surgery center, MIPD can be safely implemented (12,29). But, is this experience reproducible? MIPD outcomes improve progressively with case volume. Proficiency seems to be attained after about 40–80 cases (30-32). In reality, pancreatic surgery is uncommon and few hospitals can provide such a volume of pancreatic disease burden to realistically facilitate programmatic adoption of MIPD. Only 5% of the 634 hospitals performing PD in the National Cancer Database perform greater than twenty cases per year (33). Not only are the high volume centers sparse throughout the country, many of the high volume centers would still require surgeons to spend multiple years attaining proficiency. 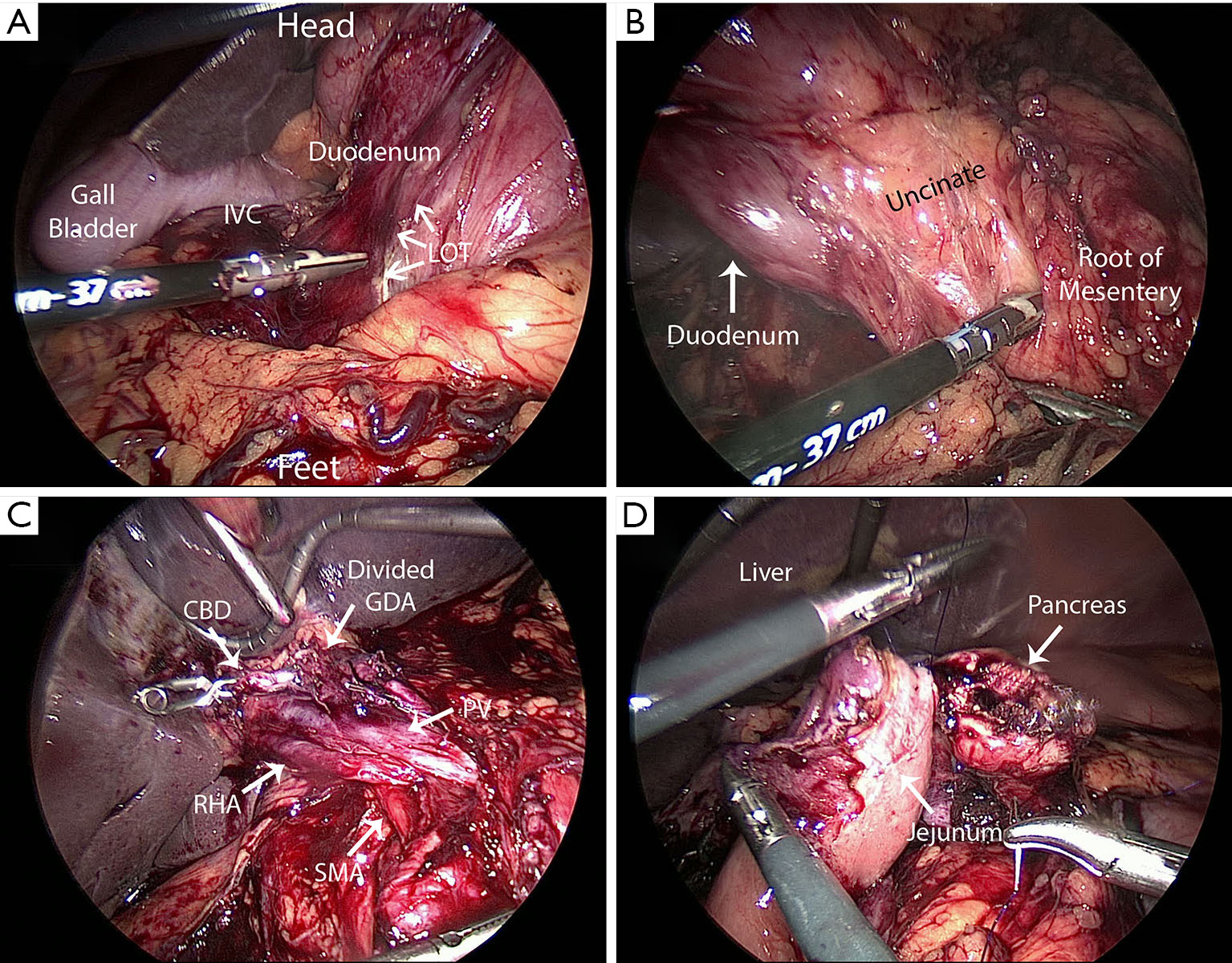 PD surgical volume matters. It is well described that high volumes centers have markedly improved outcomes after OPD (34-37). The same applies for MIPD but is not followed in practice. Adam et al. evaluated 865 patients who had undergone MIPD from the Healthcare Cost and Utilization Project National Inpatient Sample from 2000 to 2012. The median number of cases per hospital was six. In support of the notion that iterative practice impacts results, post-operative complication rates decreased as hospital volume increased, plateauing at 22 cases per year (3). In an evaluation of data obtained from the National Cancer Database, Sharpe et al. found increased 30-day mortality at centers doing less than ten MIPD per year (4). Torphy et al. report a similar decrease in 90-day mortality at centers performing more than 6 MIPD per year (38). A review of the National Cancer Database demonstrated that only half of the 246 hospitals performing MIPD over a two year period had performed more than one (2). These studies hint that many centers are attempting MIPD but are still in their infancy in regards to the learning curve.

This volume-equals-quality reality has driven regionalization of PD, and this may present the opportunity for high-volume centers to safely and effectively adopt MIPD. Training programs in MIPD are presently lagging behind interest, but new programs to precept and proctor MIPD are being developed. de Rooij et al. implemented a training program to include “technique description, video training, and proctoring” to help ensure safe practice and acceptable outcomes of LPD (39). Hogg et al. offer a video-based, coaching curriculum to better prepare surgeons for minimally invasive pancreatic resections within the context of a competitive, high-volume surgical oncology residency program (33). Programs such as these may finally offer opportunities to train new surgeons through the learning curve in MIPD.

The optimal patient for initial attempts at MIPD seeks unaffected dissection planes (i.e., neuroendocrine neoplasm or duodenal gastrointestinal stromal tumor), but also then presents the worst possible candidate with respect to the risk for POPF (40,41). In fact, patient selection for MIPD varies widely by surgeon and center (Table 2). These varied inclusion and exclusion criteria make comparisons of outcomes across centers difficult. The most common indications for MIPD appear to be periampullary cancers and the most common exclusion appears to be patients with borderline resectable disease. Coupled with the concept of operative volume above, the notion that a small pancreatic cancer leading to a “double-duct-sign” with pristine tissue planes will be available in abundance for a novice MIPD surgeon to gain experience upon is naïve. 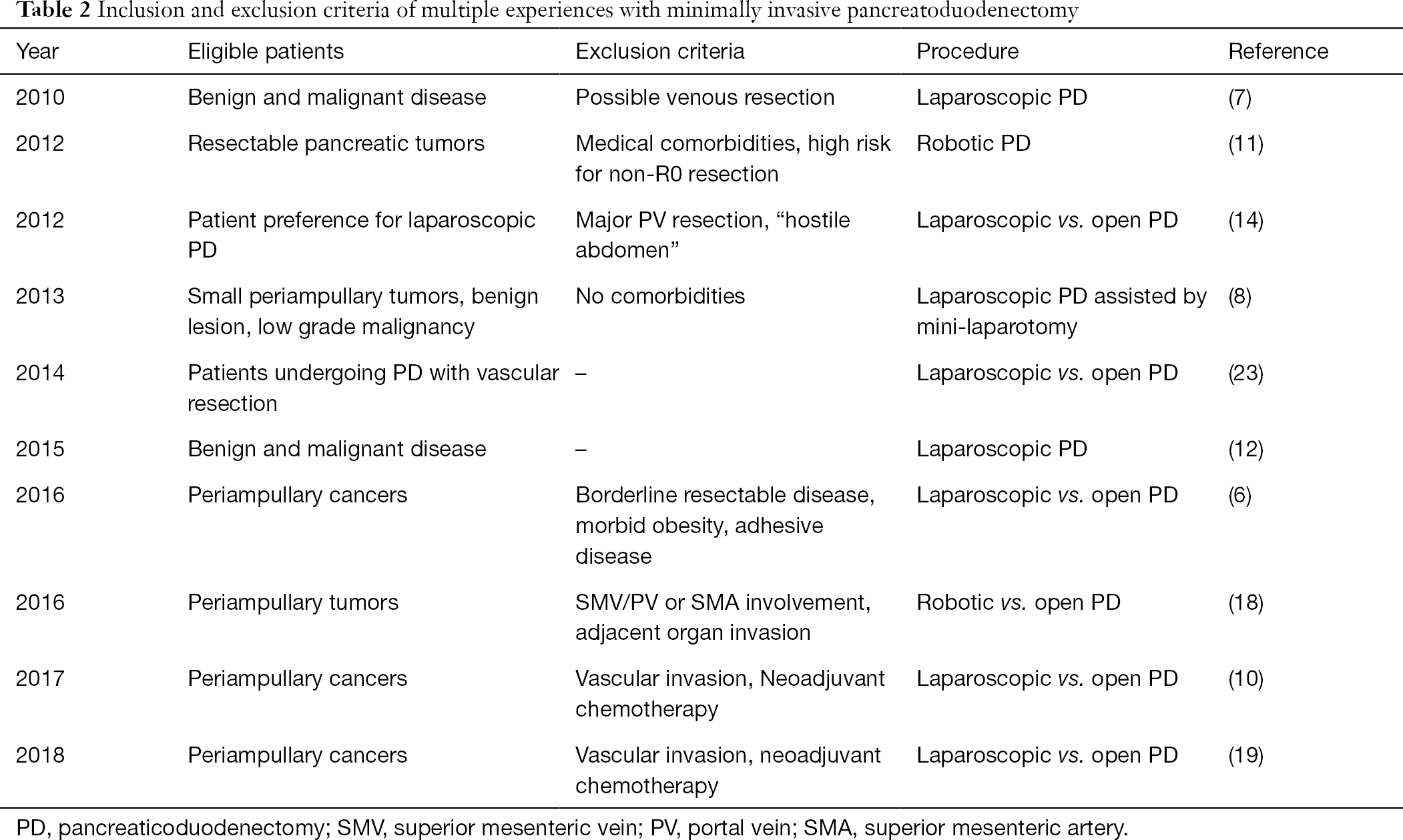 Conversion to an open procedure to achieve the surgical goal safely or effectively is germane to minimally invasive surgery. Conversion rates from MIPD to OPD are reported to be in range of 6–16% (6,11,12,14-16), although Chapman et al. report a conversion rate of 30% in patients over the age of 75 in a review of the National Cancer Database (42). Itemized reasons for conversion include: underestimation of disease burden, failure to progress intra-operatively, vascular involvement, and uncontrollable hemorrhage.

Uncontrollable hemorrhage deserves further discussion. The natural evolution of applying minimally invasive approaches to established procedures is to expand the pool of candidates by iteratively accepting increasing levels of technical challenge and risk. For example, a select, few high-volume centers now routinely perform MIPD with portal vein resection and reconstruction (43,44)—these cases were not in the initial inclusion criteria for MIPD at these centers. During this expansion of the capabilities of MIPD by an individual surgeon or center, emergent conversions for uncontrollable hemorrhage occur. In our series, this occurred roughly between the 75th and 150th case, and the mortality rate for these eight patients was 25% (unpublished data). This concept became a significant point of discussion at the International Hepato-Pancreato-Biliary Association Meeting in Sao Paolo, Brazil in 2017 (45), but the risks and challenges of this second learning curve remain poorly understood or defined.

In fee-for-service health care systems, there is a hypothetical market advantage to offering minimally invasive surgical options to patients. The marketing of robotic or laparoscopic surgery appeals to patients and has the potential to increase operative volume, but presently, there is no other financial incentive driving surgeon interest in MIPD.

Multiple cost analyses of LPD have found that the laparoscopic approach is associated with increased operative cost (46-48). This expense may be underestimated during the learning curve given longer operative times and the inclusion of multiple attending surgeons. Further, there is no separate CPT code for MIDP to offset this cost. Yet, despite this difference in operating room cost, the total cost of index hospitalization tends to be equivalent to OPD (46-48). This may be due to offsetting the increased operating room cost by a shorter intensive care unit stay and total length of hospital stay. Two studies have demonstrated a decreased rate of discharge to continued care facilities which may help decrease total episode of care cost, but complete data to support this notion are not available (25,46).

Multiple pitfalls have prevented MIPD from gaining traction since it was first described in 1994. A handful of high-volume centers routinely offer MIPD to the majority of PD patients and have produced data that suggests subtle benefit over OPD. A lack of convincing, high-quality data showing transformative benefit in clinical outcomes or cost as seen with adaptation of other surgical procedures has tempered growth. Further, the need for a large volume of a relatively uncommon operation coupled with a significant learning curve will confine MIPD to select centers. These forces will continue to limit adoption and expansion of MIPD and enthusiasm for creating formal training programs in MIPD.