Pancreatic cancer remains one of the most deadly cancers despite ongoing research to improve prognosis (1). Five-year survival rates remain below 10% in both males and females worldwide (2). Although its incidence in the US is relatively low (11th among all cancers), pancreatic cancer is the third leading cause of cancer-related mortality (3). Surgical resection is the only potentially curative treatment, but unfortunately only 15–20% of US patients present early enough to be surgical candidates (4). Thus, timely and successful resection is of paramount importance for survival.

It is well established that not all healthcare is created equal, thus an investigation of potential factors that can impact patient outcomes (e.g., facility type, case volume, patient insurance status) is warranted to maximize survival in this high-risk patient population. Some previous studies have examined the average length of stay (ALOS) following pancreatic resection (5-7), and have identified varying associations of surgical outcomes with facility type (academic vs. non-academic) and case volume (8-13). Healthcare inequity is also a challenge for pancreatic cancer patients due to lower resection rates in government-subsidized vs. privately insured patients (14,15). While previous studies have investigated the impact of some institutional or payor factors on surgical outcomes, few have comprehensively evaluated multiple facility and payor variables in a large patient sample, and even fewer utilize recent data which is representative of the significant changes in the healthcare industry in the past decade. In this study, we investigated the effect of facility type (academic vs. non-academic), surgical case volume, and patient insurance status on length of stay (LOS), and 30- and 90-day mortality rates.

Surgical outcome measures were retrieved from the National Cancer Data Base (NCDB) for 172,370 pancreatic cancer patients diagnosed between January 1, 2010 and December 31, 2015.

The NCDB is a joint project of the Commission on Cancer (CoC) of the American College of Surgeons and the American Cancer Society. The CoC’s NCDB and the hospitals participating in the CoC NCDB are the source of the de-identified data used herein; they have not verified and are not responsible for the statistical validity of the data analysis or the conclusions derived by the authors. The data queried for our study, which cover 2010–2015, were the most recent available at the time of application for NCDB access and remain only 1 year behind the latest data available as of the time of publication.

We utilized the International Classification of Diseases for Oncology (ICD-O-3) codes to select patients for inclusion. Patients over the age of 18 with a primary diagnosis of pancreatic neoplasm (ICD-O-3 8000-8005), pancreatic carcinoma [8010–8015, 8020–8022], pancreatic adenocarcinoma [8140, 8141, 8143, 8147], mucinous adenocarcinoma [8480, 8481], signet ring cell carcinoma [8490], duct carcinoma [8500, 8501, 8503, 8504, 8507, 8508], and adenocarcinoma with metaplasia [8570–8576] were queried. Neuroendocrine neoplasms were excluded. To provide professional clinical guidance for the interpretation of post-operative outcomes and other systemic treatments, we secured the assistance of an oncologist specializing in treatment of pancreatic cancer and research of multifaceted novel therapeutics for this disease.

Differences in ALOS were assessed using Wilcoxon Rank Sum and Kruskal Wallis tests. Due to the skew of LOS data, median LOS and interquartile range were calculated for all comparison groups to account for this distribution. Univariable logistic regression was used to investigate associations between facility features or insurance status, and 30- and 90-day mortality. A multivariable logistic model of 30- and 90-day mortality was built using inclusion criteria of P<0.1 in univariable analyses. Multivariable logistic regression adjusted for age, race, histology, insurance status, facility type, facility surgical volume, and year of diagnosis. Though facility type and surgical volume variables were correlated, they were not colinear, and thus both were included in the multivariable regression model to clarify the relationship between facility type/surgical volume and mortality.

We investigated the impact of facility type, surgical case volume, and insurance status on the pancreatic resection outcomes of 34,718 patients with pancreatic cancer. Demographics of the patient population are displayed in Table 1, while specific treatment details including treatment type, surgery frequency, and time elapsed to surgery are reported in Table S1. 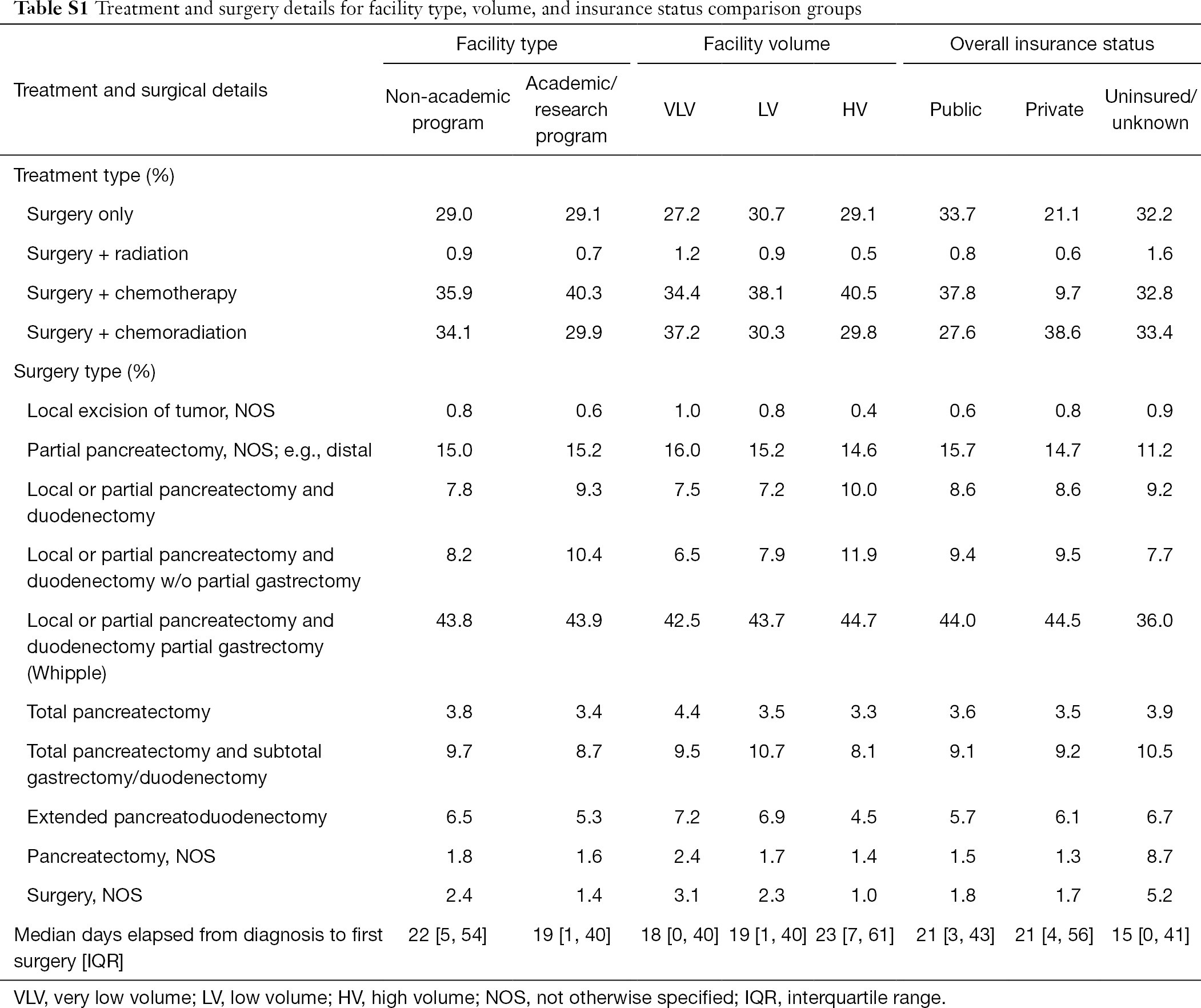 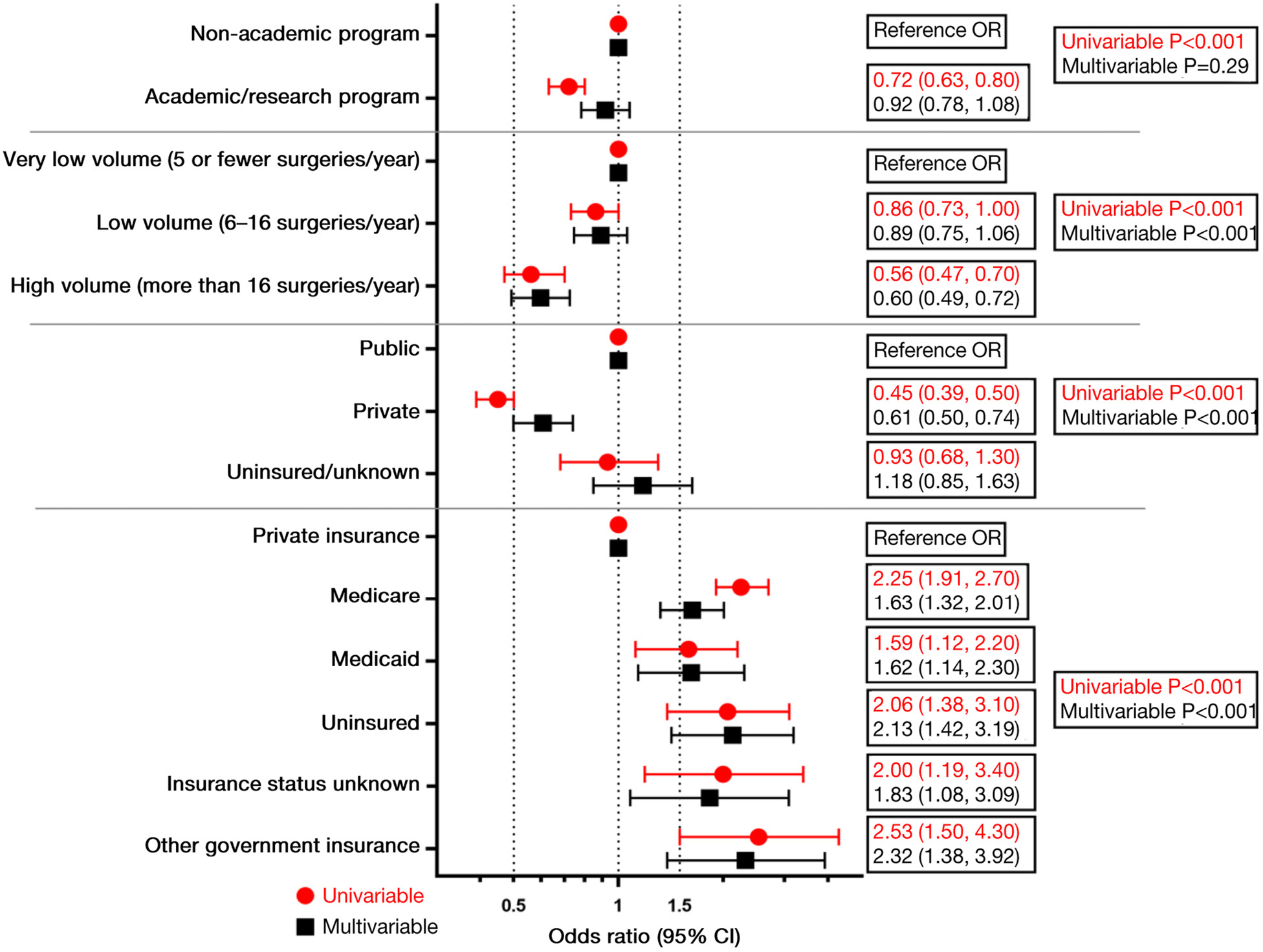 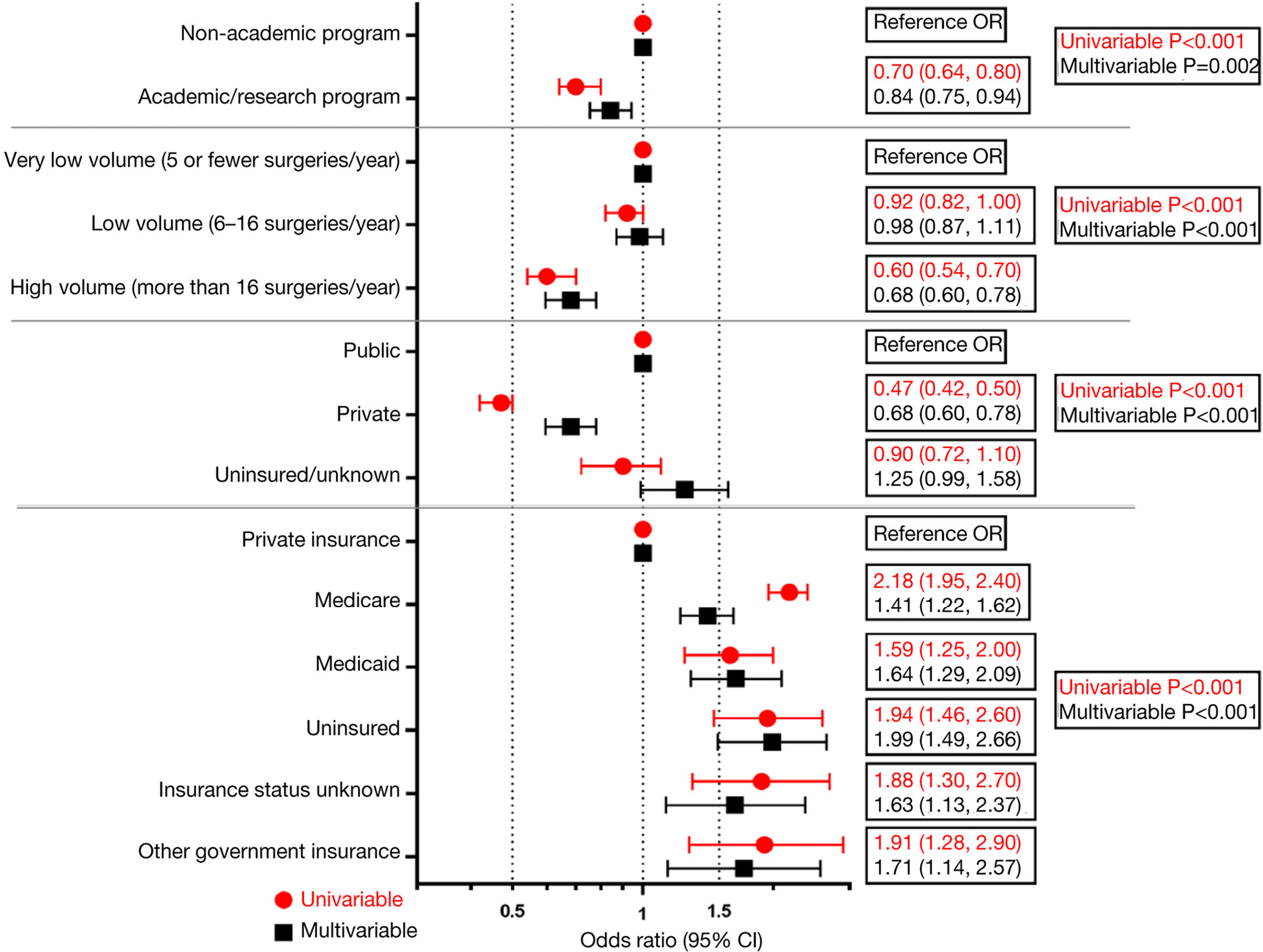 Pancreatic cancer continues to present significant challenges in detection and treatment. Although previous studies have identified variability among US hospitals in pancreatic cancer outcomes (9), given the sweeping changes in healthcare reimbursement over the last decade, a comprehensive evaluation of factors that influence postoperative outcomes in a large recent patient sample is warranted. In this study, we demonstrate that pancreatic resection at high-volume centers, and academic centers to a lesser degree, is associated with lower short-term postoperative mortality.

The ALOS of pancreatic cancer patients following pancreatic resection was found to be 10.3 days, which is higher than some previous studies, which may be due to our inclusion of only surgical patients. Previous studies of the SEER-Medicare database reported ALOS of 6.4 days (16) and 9.1 days (6), but did not focus specifically on surgical patients. A previous NCDB study investigated ALOS after pancreatectomy and identified a median ALOS of 10 days, similar to our cohort (7).

Though significant differences were observed between ALOS in our comparison groups, our data were not normally distributed and, in many groups, included outlier patients with very high LOS. Thus, median LOS is likely a more appropriate method to compare LOS between our cohorts. The median LOS for all groups, including by facility type, volume, and insurance status, was 8 days, indicating that none of these three variables likely have a meaningful impact on the postoperative LOS after pancreatic resection. When viewed in the context of our other findings regarding differences in mortality, the equivalent median LOS between our comparison groups indirectly suggests that the frequency of events which commonly lead to extended postoperative LOS, such as infectious, nutritional, or thromboembolic postoperative complications, may be similar between our cohorts. However, as data regarding the specific occurrence of such events were unavailable in our database, we cannot definitively confirm this inference.

Our definitions of case volume were inspired by Birkmeyer et al., who previously described an absolute difference in operative mortality of 12% between HVF and facilities with under 1 pancreatic resection annually (8). Other studies have demonstrated a volume-outcome relationship between pancreatectomy and postoperative mortality (10-12,17-20). Comparatively few studies have investigated the impact of hospital teaching status. A study of 3,337 patients in 1996–1997 from the National Inpatient Sample identified lower operative mortality at teaching hospitals, but this was thought to be secondary to higher case volume (21). Additionally, nearly three decades have passed since many of the studies in this field were carried out, during which time significant changes in healthcare practices and techniques have occurred.

We demonstrate, using a larger and more recent sample, that the discrepancy in short-term postoperative mortality after pancreatic resection persists, with patients treated at non-academic programs and VLVF facing significantly greater mortality risk. Notably, 90-day mortality at non-academic facilities remained higher even after adjusting for surgical case volume, supporting the hypothesis that factors aside from volume are responsible. These differences in mortality do not appear to be explained by differing frequencies in treatment modality, surgery type, nor the time to surgery. Improved outcomes at academic facilities may be explained by greater access to modern surgical equipment and techniques, more experienced physicians, and greater team-based care due to increased staffing and presence of trainees. Interestingly, since only 90-day mortality, but not 30-day mortality, was lower at academic centers, it is possible that improved follow-up and post-discharge management may contribute to increased survival after 90 days.

Notably, one fourth of patients underwent resection at a VLVF. Despite strong evidence to support a volume-outcome relationship in pancreatectomy, there are clearly facilities throughout the US that continue to perform such therapy despite having a low volume. Since surgery is the only potentially curative treatment, our findings strongly suggest that referral to an academic, high-volume institution may improve postoperative mortality.

Insurance status exhibited the strongest association with postoperative mortality after pancreatectomy. Healthcare inequity has been linked to lower resection rates and receiving treatment at low volume institutions (14,22). We observed that privately insured patients demonstrated lower mortality than publicly insured patients and all individual insurance groups. Our study is one of the first to evaluate, by specific insurance category, the short-term postoperative mortality of patients undergoing pancreatic resection. We demonstrated a significant association between 30- and 90-day mortality and non-private insurance, though the magnitude of the risk varies by insurance type.

Predictably, the greatest mortality risk after adjusting for age was in patients without insurance or with insurance other than Medicare and Medicaid (e.g., Veterans Health Administration, Indian Health Service). Such patients with limited healthcare access may face barriers in seeking care for postoperative complications, which may account for their highest mortality. However, increased mortality was also observed in Medicare patients, the largest group of patients in our study, even after adjusting for age and stage. While few other studies exist in this field, our findings are congruent with a previous NCDB study which also demonstrated lower postoperative mortality in privately insured patients (7). Our data provide evidence of the tangible effect of insurance status on the short-term mortality after pancreatectomy. Further investigation is necessary to determine why private insurance appears to be a protective factor against short term mortality and identify opportunities for improvement of postoperative follow-up of patients without private insurance, especially those with Medicare.

This study is limited by its solely retrospective design and dependence on ICD-O-3 codes. Mortality data for 6,584 patients were missing from NCDB. NCDB omits data on the causes of short-term mortality, which limits the interpretation of how facility or payor variables may influence surgical outcomes. While we used the prominent Birkmeyer et al. study to inform our volume cutoff criteria, values used in other studies vary significantly which complicates comparison (8).

Short-term postoperative mortality rates of patients who undergo pancreatic resection for pancreatic cancer are significantly higher at VLVF, supporting the existence of a volume-outcome relationship as with other procedures. Despite this fact, a quarter of the patients analyzed were treated at VLVF. Lower 90-day mortality was observed at academic vs. non-academic programs. All insurance types including Medicare displayed higher odds of 30-day postoperative mortality than private insurance even after multivariable regression adjusting for age. Notably, these differences in mortality were present despite an equivalent median LOS between all cohorts. Despite continuing efforts towards healthcare equity in the last decade, privately insured patients at high-volume surgical centers continue to experience better outcomes after pancreatic resection.

Funding: We are grateful to Mayo Clinic Alix School of Medicine for providing financial support for statistical analysis.

Ethical Statement: The authors are accountable for all aspects of the work in ensuring that questions related to the accuracy or integrity of any part of the work are appropriately investigated and resolved. As this study utilized solely aggregate, deidentified data from the National Cancer Data Base, it was exempt from necessitating IRB approval at our institution.