The pancreas is entirely devoid of squamous cells, thus squamous cell carcinoma of the pancreas (SCCP) has historically been a debated entity (1,2). However, squamous metaplasia of the ductal columnar cell has been noted in the setting of chronic pancreatitis, after pancreatic duct stenting (2,3) and lining certain non-malignant pancreatic cysts. SCCP are seldom addressed in the literature and only as case reports. Comprehensive clinical trials are not reported (2,4). Ntanasis-Stathopoulos et al. described 54 cases throughout the years of 2000–2012 (constituting 0.5–0.2% of all pancreatic tumours) (5-7). Since then 6 more case studies have been reported by Zhang et al. (8). Majumdar SKD et al. stated that pancreatic tumours had a very low cure rate at 7% (7). Pure squamous histology has poor prognosis (7,9,10) and has an inferior survival rate compared with adenosquamous (A-SCC) and adenocarcinoma (AD), which have similar survival rates to each other (4,11-13). Locally metastatic or locally advanced disease at presentation is associated with higher mortality rates in SCCP than that of adenocarcinoma (6). However, PSCC has a diverse survival rate that varied significantly according to increasing age, and stage of the disease at presentation (6). The disease is aggressive and characteristically does not respond to chemotherapy or radiotherapy (7,14). A previous study reported that chemotherapy or radiotherapy resistance of the disease is recognised as a consequence of intratumoral hypoxia that induce hypoxic microenvironment, and subsequently stimulates tumour invasion and progression (15). However, the role of the hypoxic microenvironment in pancreatic neoplasm is complicated and necessitates further investigation (15).

Endoscopic ultrasound (EUS) (Figure 1C) revealed a 50 mm × 35 mm hypoechoic solid and cyst mass in the neck and body of the pancreas and two adjacent nodules corresponding to the nodules detected at CT. An endoscopic ultrasound guided fine needle aspiration (EUS-FNA) of the mass was performed, using a 25-gauge ProCore and samples were sent for cytopathology, which confirmed the diagnosis of SCCP (Figures 2,3). 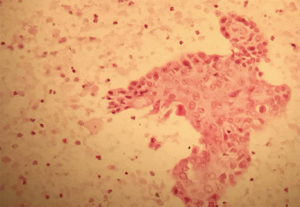 Figure 2 Photomicrograph of a cell block section, stained with HE (magnification of microscope, ×10). A micro biopsy of squamous cell carcinoma is seen. 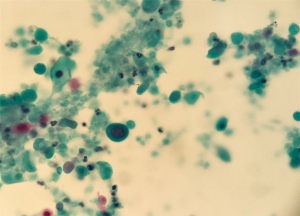 Figure 3 Photomicrograph of a Papanicolaou stained cytospin preparation from the EUS-FNA of the pancreatic lesion (magnification of microscope, ×40). A malignant squamous cell is seen, on a background of necrotic cell debris.

Subsequently, a workup for detecting an alternative squamous cell primary tumour was negative. Staging scan shown no evidence of distant metastatic disease. Ultimately, the diagnosis of locally advanced SCCP with lymph nodes metastasis (peritoneal nodes in the greater and lesser omentum) was confirmed. The tumour was inoperable at specialist multi-disciplinary conference. The management plan was adjuvant chemotherapy. Following completion chemotherapy, the patient developed quite significant epigastric discomfort. CT abdomen and pelvis revealed progressive pancreatic tumour measuring 7.4 cm × 6.5 cm with central necrosis and local extension to the liver and a large intrahepatic fluid collection. Then patient was commenced on broad spectrum antibiotics (ciprofloxacin and metronidazole) and no chemotherapy was commenced. The discussion was thoroughly explained to the patient and her family. Palliative supportive care was sought with regards to pain control (opiate medication) and patient was transferred to hospice care with symptom management. However, the patient died approximately four months after being diagnosed.

All procedures performed in studies involving human participants were in accordance with the ethical standards of the institutional and/or national research committee(s) and with the Helsinki Declaration (as revised in 2013). Written informed consent was obtained from the patient’s next of kin (deceased patient) for publication of this case report and any accompanying images.

The first case of SCCP was described by Lowry in 1949 (11). Baylor and Berg described the incidence of pure SCCP as 0.5% of pancreatic carcinomas (4). In 1992, in a survey in Japan, 1,300 cases of pancreatic cancers observed at autopsy, only 0.7% were squamous cell carcinoma. Halpert, in a series of 120 patients, described an incidence rate of 5% pure SCCP (4). However, no cases of SCC were found in the 1,211 pancreatic carcinomas collected from pancreatic cancer archives in Japan (as quoted by Anagnostopoulos et al.) (2,4).The discrepancy in the reported incidence rates may be explained by the fact that a greater proportion of the cases represent adenosquamous carcinoma rather than pure SCCP (2,11). Additional origins might include the ability of stem cells to differentiate into either squamous or glandular carcinoma, an adenocarcinoma undergoing squamous transformation, squamous metaplasia of the ductal epithelium (chronic inflammation) or an aberrant squamous cell experiencing malignant change (2,16). Characteristically patients are asymptomatic, thus the diagnosis of SCCP for the majority of patients occurs during the advanced stage of the disease (2,14).

In our case, diagnosis was confirmed by EUS-FNA (Figure 1C). Since it was first reported by Lai et al. EUS-FNA has been considered to be gold standard investigation (11,17). In 2017, Modi et al. documented utilization of in vivo needle-based confocal laser endomicroscopy (nCLE) in order to achieve an early detection of the PSCC and subsequent therapeutic approach (10). The treatment options for SCCP are limited (8,14). Majuµdar SKD et al. suggested that PSCC tumours are very aggressive, do not respond to chemotherapy or radiotherapy and an exceptionally short overall survival rate (7,14). Rowe et al. revealed that in cases of unresectable disease, the optimal treatment strategy is poorly understood (5,7,8). Surgical resection is deemed the only conceivably curative treatment (14,17) and adjuvant chemotherapy with gemcitabine or S-1 (an oral fluoropyrimidine derivative) is frequently given after surgery (17). Furthermore, surgical resection of the primary tumour was associated with longer OS in stages I–II (9), whereas chemotherapy was associated with longer overall survival in stage IV disease (18).

Regrettably, the patient described in this case report developed intrahepatic fluid collections and no chemotherapy was offered following repeat presentation. Without effective treatment, a median survival of only 3 to 4 months is generally expected in metastatic disease.

Taibi et al. stated that Gemcitabine is considered the gold standard adjuvant drug (9). Neoadjuvant chemotherapy followed by surgical exploration has been studied in patients with locally advanced pancreatic cancer with gemcitabine or a fluoropyrimidine (fluorouracil plus leucovorin or S-1 in Japan) has been shown to significantly improve outcomes and is recognized as standard care in patients with resectable pancreatic tumour (8,19). Platinum-based drugs, Gemcitabine, Platinum-based drugs, and 5-FU are the most frequently used therapeutic agents. Zhang et al. addressed that survival rates were poor for unresectable pancreatic SCC, excluding one patient who lived for 18 months following radiotherapy and chemotherapy with 5-FU and capecitabine (8). Adjuvant therapy for resected pancreatic tumour with a modified FOLFIRINOX regimen led to considerably longer survival than gemcitabine, at the expense of a higher incidence of toxicity (14,19).With respect to, metastatic and unresectable disease, FOLFIRINOX [fluorouracil, folinic acid (leucovorin), irinotecan, and oxaliplatin] and gemcitabine plus nanoparticle albumin-bound paclitaxel (nab-paclitaxel) are considered the treatments of choice (17,19,20). Regarding metastatic adenocarcinoma of the pancreas, the same therapeutic approach is generally applied (9,19).

This strategy may present some hope, which has been obscure in the disease (21).

In summary, pure SCCP is a rare tumour. Metastasis from other primary squamous cell cancers (lung, oesophagus, cervix, kidney, and skin) should always be excluded in the first instance at initial diagnosis (16,24). The disease is highly aggressive, most often locally advanced, or metastatic at diagnosis. Based on the rare incidence of the histologic subtype of tumour, diagnosis and treatment will remain an enormous challenge (3,14). With respect to lack of evidence based data, randomized controlled trials should be addressed (8,14). Collective epidemiological reports are considered essential to confirm outcomes stemming from the limited amount of published case studies of this rare entity in order to ultimately improve patient outcomes and survival rates.

The authors would like to thank Mrs Brid O’Connor (Palliative care nurse) and Margret Cotter (nurse) for their help and support.

Conflicts of Interest: All authors have completed the ICMJE uniform disclosure form (available at http://dx.doi.org/10.21037/apc-19-51). The authors have no conflicts of interest to declare.

Ethical Statement: The authors are accountable for all aspects of the work in ensuring that questions related to the accuracy or integrity of any part of the work are appropriately investigated and resolved. All procedures performed in studies involving human participants were in accordance with the ethical standards of the institutional and/or national research committee(s) and with the Helsinki Declaration (as revised in 2013). Written informed consent was obtained from the patient’s next of kin (deceased patient) for publication of this case report and any accompanying images.