Pancreatic neuroendocrine tumors (PanNETs) are rare neoplasms that originate from endocrine cells within the pancreas. The incidence of PanNETs is less than 1 in 100,000 individuals per year (1). PanNETs are clinically categorized as functioning or nonfunctioning based on hormonal symptoms (2). These hormones include insulin, gastrin, glucagon, vasoactive intestinal peptide, and somatostatin. Approximately 60–90% of PanNETs are nonfunctional (3,4). Nonfunctional PanNETs can rarely transform into functional hormone-secreting PanNETs, which can have life-threatening effects (5-10).

Insulinomas are a type of PanNET with an incidence of 4 cases per million per year (11). Insulinomas are typically benign and cured by resection. However, approximately 10% have malignant characteristics, which means local invasion or distant metastasis. Malignant insulinomas have higher levels of pro-insulin, insulin, C-peptide and are associated with worse survival compared to benign insulinomas (12). Malignant insulinomas tend to have increased relative expression of proinsulin compared to insulin (12). The transformation of a previously nonfunctional PanNET in a malignant insulinoma is exceedingly rare. Due to the paucity of cases in the literature, the management is not well defined. In this report, we describe two rare cases of transformation of metastatic non-functional PanNET into a metastatic functional insulinoma. We present the following cases in accordance with the CARE reporting checklist (available at https://apc.amegroups.com/article/view/10.21037/apc-22-1/rc).

All procedures performed in this study were in accordance with the ethical standards of the institutional and/or national research committee(s) and with the Helsinki Declaration (as revised in 2013). Written informed consent were obtained from the patients’ next of kin for publication of these case reports and accompanying images. A copy of the written consent is available for review by the editorial office of this journal.

The patient was a 67-year-old male who was initially evaluated after a chief complaint of persistent abdominal pain. Computed tomography (CT) scan found a 2.7 cm × 3.0 cm × 3.8 cm solid, enhancing mass in the pancreatic head without ductal dilatation and small peripancreatic lymph nodes measuring up to 1.4 cm anterior to the pancreatic head. Pancreaticoduodenectomy, partial gastrectomy, and cholecystectomy were performed. Pathology revealed 3.5 cm well-differentiated pancreatic neuroendocrine neoplasm. Immunohistochemical (IHC) labeling revealed that neoplastic cells were for positive synaptophysin and chromogranin, with the Ki-67 proliferation index less than 3%. Neoplastic cells were also negative for insulin but focally positive for glucagon (Figure 1). Negative margins were obtained with 14 of 28 lymph nodes positive for metastatic tumor.

Eleven years after surgery the patient was admitted to his local hospital for symptomatic hypoglycemia after developing a seizure and loss of consciousness. He was found to have a glucose of 13 mg/dL. During a prolonged 1-month admission, his treatment included intravenous (IV) dextrose solution, diazoxide 100 mg 4 times per day, prednisone 10 mg twice per day, and subcutaneous octreotide 100 mcg three times per day. He transiently had blood glucoses in the 80–90 mg/dL range and was discharged.

Treatment for hypoglycemia was directed at metabolically blunting insulin secretion, using cytotoxic agents against the insulinoma, and supplementing with high concentration dextrose solution. The patient was continued on diazoxide, prednisone, and started pasireotide, a newly developed potent somatostatin analog with increased affinity for somatostatin receptor 5 (SSTR5) (13), to decrease insulin secretion. He also had a cytotoxic chemotherapy trial of temozolomide and capecitabine to target the functional tumor, which was based on previous data in metastatic PanNET (14).

Despite these aggressive measures, the patient could not be safely weaned off intravenous dextrose, and he and family decided to pursue comfort measures. The patient died 3 months after initial evidence of tumor functionality. An abbreviated timeline of events is shown in Figure 3.

The patient was a 69-year-old male with a history of diabetes mellitus, hypothyroidism, and benign prostatic hyperplasia who was initially evaluated after a chief complaint of abdominal pain. CT scan identified a 6.3 cm × 3.9 cm hyper-enhancing mass in the tail of pancreas obstructing the splenic vein, a thrombus in the splenic vein extending into the portal vein, and splenomegaly. The tumor was not amenable to surgical resection. Percutaneous biopsy was performed, and pathology revealed that neoplastic cells were positive for synaptophysin and chromogranin, with the Ki-67 proliferation index of ~1%, and consistent with neuroendocrine tumor. The patient was started on intramuscular monthly octreotide 30 mg and had persistent thrombocytopenia due to splenomegaly. He had two episodes of upper gastrointestinal bleeding in 4 years after diagnosis, and esophagogastroduodenoscopy showed significant portal hypertension. He was started on propranolol and had no further bleeding complications for several years.

Seven years after diagnosis, the patient developed hypoglycemia. He was previously on insulin for diabetes mellitus, and his insulin regimen was decreased and eventually discontinued over several months. His hypoglycemia became worse, and the patient required increased interventions until he was admitted that year with severe symptomatic hypoglycemia. He was started on diazoxide 250 mg every 8 h then transferred to our hospital for further management.

Though the patient was able to be discharged 1 month after initial presentation off intravenous dextrose, he presented 2 months later with symptomatic and refractory hypoglycemia to prednisone 10 mg twice per day and pasireotide 40 mg monthly. There were new hepatic metastases noted on CT scan (Figure 2D-2E). An octreotide scan was performed to assess if there were a focal lesion within the PanNET that was amenable to cryoablation. The octreotide scan found increased uptake in the pancreatic tail and hepatic involvement that was concerning for potential metastatic involvement (Figure 2F). Cryoablation was not pursued due to multiple episodes of gastrointestinal bleeding during this hospitalization. Inpatient chemotherapy with temozolomide and capecitabine was deferred due to bleeding complications. The patient and family decided to pursue comfort measures, and he died 13 months after initial evidence of tumor functionality. An abbreviated timeline of events is shown in Figure 4. 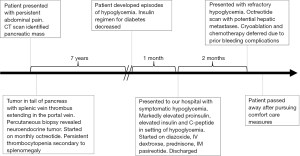 Pathophysiology of transformation into functional PanNET

This case report also highlights the difficulties in management of metastatic insulinoma, particularly those with high metastatic burden to the liver. Malignant insulinomas are less responsive to therapies including diazoxide compared to benign insulinomas and require a multimodal approach (20). Medical therapies directed at hypoglycemia include diazoxide, somatostatin analogs (octreotide, lanreotide, pasireotide), and everolimus help to decrease insulin secretion (21).

Diazoxide opens ATP-sensitive potassium channels of pancreatic beta cells, which decreases insulin secretion (22). It is also a potent vasodilator and can result in significant peripheral edema and hypotension.

Somatostatin analogs can have a mixed effect on hypoglycemia, depending on the somatostatin receptors primarily expressed on the insulinoma cells (23). There have been reports of octreotide worsening hypoglycemia in insulinoma, which is thought to be secondary to increased relative suppression of glucagon compared to insulin (24,25). This paradoxical effect is thought to be worse in patients with insulinomas which lack SSTR-2 and SSTR-5 (26). Somatostatin analogs also have potent anti-proliferative effects.

Everolimus is an mTOR inhibitor that has demonstrated improved progression-free survival compared to placebo in patients with advanced PanNET (27). One notable side effect of everolimus is hyperglycemia, and everolimus can be used as a treatment for insulinoma (28,29). Mechanistically, everolimus can be effective against insulinomas by increasing peripheral insulin resistance, decreasing pro-insulin secretion, and reducing cell proliferation (30). Notable adverse effects include pneumonitis and cardiac toxicities (29).

In terms of cytotoxic chemotherapy, streptozocin in combination with doxorubicin and/or fluorouracil have historically been the first-line choice for metastatic PanNET (31-33). Capecitabine and temozolomide regimens are now preferred regimen due to better convenience of oral therapy and favorable side effect profile compared to other regimens (14).

Sunitinib is a tyrosine kinase inhibitor that improves progression-free survival for patients with advanced PanNETs by reducing tumor proliferation and has shown some efficacy as a salvage therapy in a patient with insulinoma (34,35). However, sunitinib is associated with hypoglycemia due to effects on altering glucose metabolism (6,36).

Hepatic artery embolization or chemoembolization can provide significant biochemical and clinical response and is often used palliatively (37,38). Radioembolization utilizing radioactive isotopes can also be considered in refractory cases, though its effects are likely transient (39). Peptide receptor radioligand therapy with Yttrium-90 Dotatoc or Lutetium Lu-177 dotatate are additional options for patients who progress on somatostatin analog therapy (40,41).

Some of the additional treatment modalities mentioned in this section were considered for our patients, but overall clinical stability and goals of care precluded usage. The treatment modalities discussed for metastatic insulinoma have variable clinical efficacy and often have a short-lived therapeutic response. While there have been reports of significant response to certain therapeutics such as everolimus (42), there is no single optimal therapy and our preferred approach is the multimodal one discussed above.

Transformation of a previously nonfunctional PanNET into a functional PanNET is an extremely rare occurrence but is a clinically significant phenomenon that practitioners should be aware of especially in patients with advanced PanNET. While the exact mechanism for this transformation is unknown, the inherent hormonal plasticity of endocrine cells and the hepatic microenvironment where metastases tend to occur may induce transformation of nonfunctional PanNETs into functional tumors. Metastatic insulinoma is difficult to manage, and a multi-pronged approach targeting insulin secretion and malignant cell proliferation should be used. Further research is needed to understand the mechanism of transformation and develop more effective treatments for metastatic insulinoma.

We thank the patients’ families for their consent for publication.

Reporting Checklist: The authors have completed the CARE reporting checklist. Available at https://apc.amegroups.com/article/view/10.21037/apc-22-1/rc

Conflicts of Interest: All authors have completed the ICMJE uniform disclosure form (available at https://apc.amegroups.com/article/view/10.21037/apc-22-1/coif). RHH and DAL serve as unpaid editorial board members of Annals of Pancreatic Cancer from March 2017 to December 2022. The other authors have no conflicts of interest to declare.

Ethical Statement: The authors are accountable for all aspects of the work in ensuring that questions related to the accuracy or integrity of any part of the work are appropriately investigated and resolved. All procedures performed in this study were in accordance with the ethical standards of the institutional and/or national research committee(s) and with the Helsinki Declaration (as revised in 2013). Written informed consent were obtained from the patients’ next of kin for publication of these case reports and accompanying images. A copy of the written consent is available for review by the editorial office of this journal.